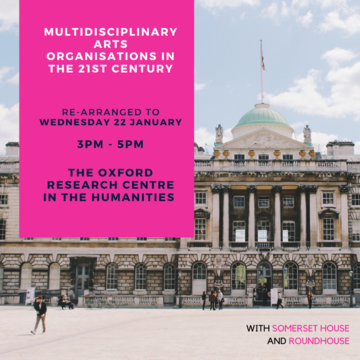 This session of the Creative Industries Pathway focuses on the multidisciplinary arts organisation in the 21st century; the challenges involved and opportunities available. Melissa Murdock, Project Manager of the Roundhouse (London)’s Coworking Hub – a Creative Space for Young Entrepreneurs – which is just coming to the end of its first pilot, will discuss how the collaborations fostered in this creative space have developed and how the Roundhouse supports young creatives. Jelica Obician, Manager of the new Somerset House Exchange – a new shared workspace for freelancers and small businesses in the arts and Creative Industries – will discuss the new ways in which Somerset House is sparking creative projects through fostering a diverse creative community – and the opportunities for creative practitioners to get involved. We invite you to join us after the talks and panel discussion for a glass of wine and an opportunity to chat to Melissa and Jelica, as well as to meet other researchers interested in working with the Creative Industries.

Jelica looks after the Somerset House Exchange, a new shared workspace that brings together freelancers and small businesses in the Creative Industries. Jelica is a freelance producer with 10 years of experience in managing events, developing cross-disciplinary artist communities, and general management in independent art organisations. She was the general manager of East London art space Apiary Studios between 2013 and 2016 where she was actively supporting the experimental sound and visual arts scenes in London along with ‘underground’ arts organisations and several up-and-coming UK and international artists themselves. Jelica’s currently involved in the development of Stour Space, a social enterprise supporting the creative community and cultural projects in East London’s Hackney Wick area and is one of the core team members of Unconscious Archives Festival and Third Mind Productions.

Melissa looks after the Roundhouse’s programmes for creative entrepreneurs & freelancers. As part of their Next Generation campaign, the Roundhouse are building a new campus, which will include a co-working space which aims to support the next generation creative business owners. Melissa is currently developing a series of CPD initiatives, including masterclasses, accelerator & leadership programmes. Melissa has a wide range of experience in Arts and Education settings; previously working at Royal Central School of Speech and Drama and Morley College. Melissa is also a maker in her own right, founding her own theatre company, Portmanteau, in 2012, to platform female experiences and for 5 years they produced and toured 4 successful shows nationally. More recently, she has launched a podcast series, ‘The Imposters Club’ exploring Imposter Syndrome, taking the same ethos from the theatre company and applying it to a new format.

If you have any questions email training@humanities.ox.ac.uk.