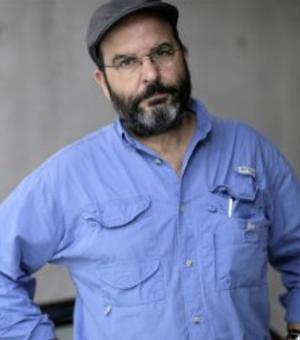 Eduardo Lalo is one of the most important cultural figures working in Puerto Rico today. He is a novelist, essayist, and artist working with a range of mediums from drawing to video. Lalo has also been professor of literature in the Faculty of General Studies at the University of Puerto Rico (Río Piedras campus) for the past three decades. Eduardo Lalo's literary oeuvre is comprised of novels, essays, poetry, graphic art and fascinating hybrids of all of these.

Some of his individual works include Ciudades e islas (1995), El deseo del lápiz: castigo, urbanismo, escritura (2010), Intervenciones, and Los países invisibles (Invisible Countries, 2008), the latter which won the Juan Gil-Albert Ciutat de Valencia essay award. He is the author of the novels La inutilidad (Uselessness, 2004), Simone (2015), and Historia de Yuké, which has just been published by Ediciones Corregidor in Argentina. For Simone, he was awarded the Rómulo Gallegos International Novel prize - an exceptional honour granted to the likes of Gabriel García Márquez for One Hundred Years of Solitude (1972) and Roberto Bolaño for The Savage Detectives (1999). Uselessness and Simone have both been translated to English and published by the University of Chicago Press.

Eduardo will spend Trinity Term 2019 in Oxford as a member of Trinity College. His academic host is Dr María del Pilar Blanco, Associate Professor in Spanish American Literature and Tutorial Fellow of Trinity College. During his stay in Oxford, Eduardo Lalo will give a series of talks about the history and literature of travellers in the Caribbean, have his photographic work exhibited at St John's College, and engage with Oxford graduate students.