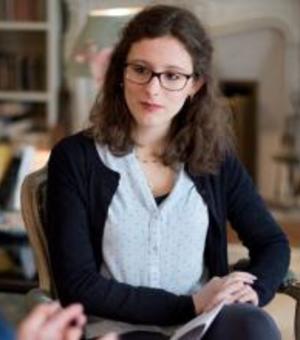 Marie Chabbert is a second-year PhD candidate at the University of Oxford. Her thesis, which is being funded by the AHRC, looks at the way in which four of France’s most original contemporary philosophical voices, namely, Georges Bataille, Jacques Derrida, Gilles Deleuze, and Jean-Luc Nancy, respond to Nietzsche’s proclamation of the death of God. Their respective response, she argues, can indeed be of crucial use in understanding problems and issues relating to the so-called post(-)secular condition, how it affects traditional categories of thought and the definitions used in social sciences as well as the impact it has on our way of relating to the world and to each other. Prior to Oxford, Marie completed a double-BA in Politics and Modern French Culture at SciencesPo Paris and La Sorbonne IV, respectively. She also completed an MPhil in comparative European literature at the University of Cambridge and an MSc in Social Anthropology at the London School of Economics. Her recent publications include a chapter entitled ‘Georges Bataille et le pas au-delà du sacrifice’ in Bataille, Blanchot, Klossowski: la question de l’expérience limite (Presses Universitaires de Paris Nanterre, 2018), a chapter entitled ‘The Pure Experience of Impurity: Georges Bataille, a Stain in/on the History of French Thought’ in The Stain in Contemporary French Culture and Thought (Peter Lang, 2018), as well as a chapter entitled 'The Step (not) Beyond Sacrifice: Georges Bataille, Jacques Derrida, and the Impossible Gift’ in Law’s Sacrifice: Approaching the Problem of Sacrifice in Law, Literature, and Philosophy (Routledge, 2019). Marie also works as a journalist for the French magazine Le Monde des Religions and is an Executive Committee member of the ‘European Interfaith Youth Network’ of Religions for Peace.