100 Years of Britons in Berlin is an interactive online project held by the Centre for British Studies of Humboldt-Universität zu Berlin. Originally intended to be an in-person exhibition in line with the Lange Nacht der Wissenschaften 2020, the project has moved to an online format to limit the spread of COVID-19. The project is curated entirely by the students and will be made available on the July 3rd 2020 at https://british-berlin.com. 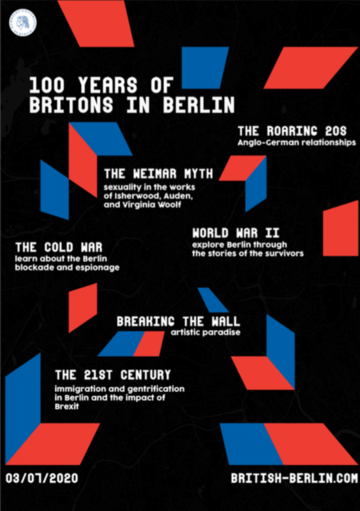 How did the British portray Berlin and what influence did the city have on the British? What was the cultural interplay between the two parties? Most importantly, what socio-political events affected the very presence of the British contingent in Berlin in the last hundred years? To answer these questions, the exhibition makes a sweeping attempt to look at the 100 years of the city’s event-filled history through the eyes of the British. The time periods examined include the 20s and Weimar years, World War II, Cold War, Post Berlin Wall, 2000s, and the years of Brexit negotiations.

The web-platform will be designed as a coherent historical timeline, paying particular attention to the themes of arts, culture, and sexuality. It will reveal the lives of British artists, authors (i.e. Virginia Woolf, Christopher Isherwood), musicians (i.e. David Bowie), as well as the ordinary people who lived and worked in Berlin and whose art and memories became ingrained with the character of the city. In the project, the personal views of the British people are studied as thoroughly as the widely-known historical facts. A compelling and emotional story of a century-long relationship between the British and Berlin.

The project’s website will contain visual materials, archived documents, maps and photos. The audience will be able to explore the project in detail and participate in quizzes, voting polls, and other interactive activities. We’re looking forward to seeing you at the project’s website at https://british-berlin.com/ starting from the July 3rd 2020. Until then, follow us on Instagram. Should you have any question, please contact us at info@british-berlin.com.