At the start of March 2021, I launched a hashtag under which to gather suggestions and contributions for a crowdsourced English tunebook. Tunebooks are simply collections of music; my research focuses on manuscript and printed tunebooks of the eighteenth-century. The aim of the crowdsourcing project was to find out how ‘Englishness’ is perceived by folk musicians around the world today.

The call-out made clear that we had a very loose interpretation of ‘English’: it could be a tune historically recorded in England, one learnt from an English player or composed by an English person. Or it might be a tune of a different (or unknown) provenance played in an English style. Some people submitted videos of themselves playing tunes, others linked to pre-existing videos and recordings of tunes they thought should be included. Still others sent me links to music notation, such as tunebooks they had created for their own folk ensembles and bands.

We had a range of submissions from around the world (mostly England and America) and across all social media platforms, including YouTube, Facebook, Twitter, TikTok, and Instagram. As some people submitted links to pre-existing material or content by others these remain untagged in the original, but I retweeted most of the submissions on Twitter, so to see them all search for #EnglishTunebook there. Although we only ran the project for a month, hashtags don’t expire, so more contributions may yet appear! Below are a few of my favourites –

I enjoyed this recording of The Sheffield Hornpipe, a traditional tune performed by Bryony Griffith on the violin.

Tim Macdonald contributed a recording of one of his own compositions, Mick Bacchus's Hornpipe, which Tim (himself from America/Honduras) wrote for a friend in Ambleside.

There are many tunes to choose from in this tunebook compiled by Paul Hardy of the Greenshoots Music Group near Cambridge.

Having spent so much time studying eighteenth-century English tunebooks, it was very interesting to see what contemporary musicians would include in a similar volume today. This conversation was continued in podcast form with a range of professional musicians, collectors and researchers: you can listen to Folk Tunes and Englishness at Anchor.fm. 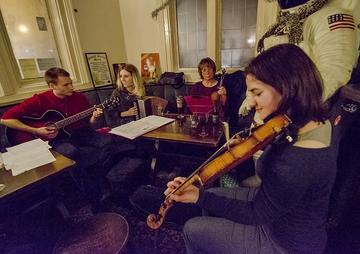