In Daniel Libeskind’s opinion, “architecture is the only art that exists completely in a drawing”. His sketches are fantastic, geometrical impressions that denote precision and relentless attention to detail. They might be some of the most expressive drawings I have ever seen, particularly when the mass context which accompanies each design is appreciated.

Libeskind’s drawings bring to attention how easy it is to take a building for granted. Often we view them as symbols of practicality; places in which we live, work and pass by without a second glance. However, buildings are able to rebel against their status as practical structures, in order to challenge their surroundings – and us. They are art forms, open to question and interpretation.

This might arise in the materials used, in the same way that the choice to draw in charcoal or ink will change an art work’s expression. For example, rather than using a base material such as brick, Studio Libeskind created an imposing, titanium-clad structure for the Denver Art Museum’s Frederic C. Hamilton Building, which houses the museum’s African and Oceanic art. Its panels reflect the surrounding Colorado landscape including a sublime backdrop of mountains, causing an amalgamation of art, metropolis and nature. There is no denying how its effect mimics an eclectic, harmonious light beam that strikes the city with history.

Resistance also appears in the shape and structure of a design, such as in the case of Libeskind’s war memorial museums. For example, the Jewish Museum Berlin is disruptive from a glance, its absence of ninety-degree angles immediately catching the eye. Instead, its foundations are seemingly unbridled zig zags, inspired by the patterns of post codes which belonged to Jews living in pre-Holocaust Berlin. “You can’t departmentalise the history of the Jews, you have to rethink it”, Libeskind says. And he has a point. Right angles might have stood for too much structure, too much tradition, a normality and ease of life which Holocaust victims were not granted.

Libeskind asks us to study his designs in order to reflect upon the history which brought them into being. Not to place sole significance on the artefacts which may be housed within, but to focus on the very foundations – to consider that an exterior’s expression counts just as much as the interior.

Daniel Libeskind delivered a lecture ‘Articulating History: Architecture and Memory’ at Oxford Brookes University on 9 February 2018 as part of the Post-War series. You can watch the lecture here. 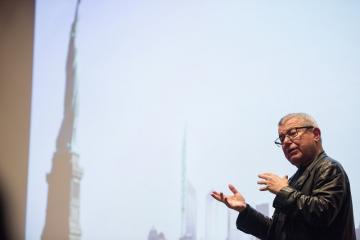