I was really excited to attend the Dignity and the Novel symposium. For me the event represented the coming together of two things that I care passionately about, Human rights (I work as a PR consultant for charities and social enterprises) and writing (I write short stories and have just finished an MA in Creative Writing at Oxford Brookes).

The event was curated by Tessa Roynon and Natasha Simonsen and in Tessa’s introduction she raised the question of whether a life devoted to books could be seen as a ‘wasted life’. This question resonated with me as I have often questioned the morality of my dream to be a full time writer, isn’t it better to be actually doing something about the injustices of the world rather than just writing about them?

The first speaker, Professor Stephen Clingman, spoke about Caryl Phillips's book A Distant Shore. The book’s protagonist is a refugee named Solomon who is murdered towards the end of the book. Solomon states that ‘If I do not share my story, then I have only this one year [the year he spent in England] to my life.’ Sharing his story meant that Solomon was able to be seen as a unique human being with a life and a history rather than simply a refugee, a problem to be solved.

Natasha Simonsen drew on her experiences as a lawyer to build on Clingman’s point about the importance of understanding the lives of others as a step towards ensuring that their human rights are respected; she said that lawyers in particular need to develop empathy for as many types of people as possible. However, as no one can have experience of every type of person, she suggested that lawyers can turn to novels through which they can experience an endless and fascinating ‘gallery’ of every type of life.

Professor Phillippe Sands spoke about Louis Begley’s novel Wartime Lies which tells the story of a young Jewish boy and his aunt who avoid persecution during the Nazi occupation of Poland through lies and assumed identities. The novel was broadly autobiographical, but Begley said that the memories were so painful that he could only bear to write it as fiction. Sands made the point that sometimes fiction is the only way that the world can learn of and learn from the suffering endured by others.

Zoe Norridge spoke movingly about The Shadow of Imana by Veronique Tadjo, which deals with the Rwandan Genocide. Tadjo writes non judgementally about the people she meets and her prose is lyrical, almost poetic. It is this combination of generosity of style and lack of judgment that allows the reader to feel empathy for everyone that Tadjo encounters regardless of which side they are on and what they may have done. Rwanda’s healing is still a long way from being complete and books like Tadjo’s can be a vital tool in this process.

In the final part of the day, eight speakers talked about books which illuminate different aspects of dignity and human rights. Mark Damazer spoke first and his incredibly arresting presentation about Vasily Grossman’s Life and Fate, a novel about soviet society told through the experience of a single family, set the bar incredibly high as well as making us all desperate to read the book.

I left the event with a long reading list and a renewed belief in the transformative power of fiction. During her talk Zoe Norridge read a quote from The Shadow of Imana: ‘we can't get close to people without them getting into our lives whether we like it or not’. After today I feel that this sentiment is equally true of the people we meet through novels and that this is what gives them the power to influence the way we view others and the world.

Rose Stevens is a writer and works as a freelance PR consultant to charities and social enterprises. Contact her by email. 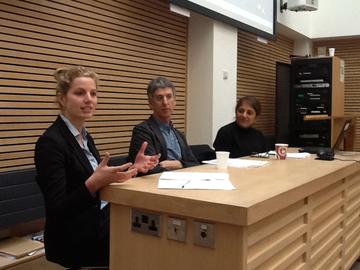