On Friday 31st March and Saturday 1st April 2017, graduate students, early career researchers, and established scholars met for the Thirteenth Oxford Medieval Graduate Conference held at Merton College, Oxford. As usual, the conference revolved around one word, one theme, chosen by the delegates of the OMGC held the year before. This year, it was about Time.

What is the OMGC? An annual conference that welcomes graduate students and early career researchers to Oxford for two full days of academic discussions around one theme. It provides a friendly and convivial forum for young academics to both gain experience presenting in a formal setting, and to meet their peers and colleagues who will make up their cohort for the length of their careers. This year, speakers came from the UK (Bristol, Cambridge, Glasgow, Leeds, London, Oxford, and York) and from Germany, Ireland, Spain, Switzerland, and the USA. As such it assures Oxford’s place as a centre for medieval graduate student interaction, and as a conference hosting up to twenty-one papers, two invited speakers, and about sixty delegates, it is one of the biggest of its kind.

This year, the conference considered various aspects of medieval Time and temporality (all panels, keynotes, and more were live-tweeted under the hashtag #OMGC17). How is Sacred Time expressed through astrology, architecture, and cosmology? How can Time be measured? How was it perceived in texts, in everyday life? Does Time stop? Can Time stop? Many discussions arose about Purgatory, its emergence and its function(s). Time was also considered in a spatial form: relics, for example, can lead the viewer to a specific point in Time/History. Visions, mystical writings, and their use of Time were another topic and focus of the days’ conversations; as were manuscripts and archives. Each day ended by a thought-provoking keynote address: one by Professor David d’Avray on ‘Questions about Time’ which considered medieval Time in relation to modern scholarships and past and present approaches on Time; another by Professor Eric Stanley on ‘Indefinable Time Experienced in Medieval Living, Sinning, Doubting, Dying.’ Professor Stanley productively talked about unproductive Time and the off-putting of Time, such as procrastination!

The quality of the papers this year was extremely high and I would like to take the opportunity to thank and congratulate all speakers, but especially those who were giving their very first paper! Discussions were equally enlightening. They were lively and respectful; a testimony to the lovely atmosphere I experienced throughout the conference. More relaxed gaps between the panels were far from unproductive: from the coffee breaks with home-made cakes baked by the Committee to the wine reception with a Time playlist and the lovely dinner in Merton College Hall. Each lunch break allowed delegates to unwind and chat and/or to visit the Merton Astrolabes (many thanks to Dr Julia Walworth, Librarian at Merton College, and to Sarah Griffin for making these visits possible).

The Oxford Medieval Graduate Conference would not have been possible this year without its committee and its sponsors. The organisers who have all done an amazing job are all postgraduate or early career Oxford medievalists from different Faculties (History, English, Music, and Medieval and Modern Languages): Caroline Batten, Anna Boeles Rowland, Hannah Bower, Henry Drummond, Sarah Griffin, Pauline Souleau, and Sian Witherden. The team was amazing and strong friendship bonds were woven which I am sure will produce more interdisciplinary collaboration in the future. All Committee members either presented at or organised the OMGC in 2016 and I am confident that some of this year’s speakers will take part in the OMGC 2018 organisation (which will be on Animals). The conference sponsors (Merton College; the Arts and Humanities Research Council; the Faculties of Music, English, and Medieval and Modern Languages at the University of Oxford; the Oxford Research Centre in the Humanities; and the Society for the Study of Medieval Languages and Literature) provided the necessary support to ensure minimum registration cost for our delegates and travel bursaries for our speakers.

I will end this rapid overview with the very last panel which focused on Cycles in life, death, and narratives. One question that was asked was: does Time just repeat itself or is there change? In the case of the OMGC, both aspects are present: Time does repeat itself as in 2018 there will be an Oxford Medieval Graduate Conference as there has been for the past thirteen years; there is also room for change from one theme to another and from one generation of postgraduate/early career academics to the next. 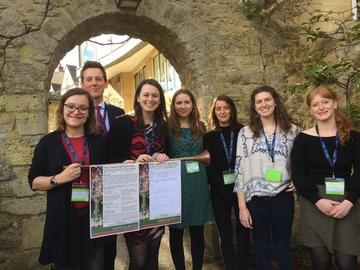