Tamara Moellenberg offers a summary of her doctoral thesis, a study of child figures in selected Anglophone West African novels.

What comes to mind when you think about children? Soft, cuddly teddy bears? Summers spent on the beach? Maybe there’s a particular writer who stokes your imagination: J.M. Barrie, A.A. Milne, or Enid Blyton. In actuality, what most likely arises is a mix of associations, some a result of your own experiences, others a product of your time and place. In my doctoral research, I probe how a selected number of Anglophone West African writers implicitly think about – and represent – children in their novels.

I first became interested in this body of writers, including Ben Okri, Uzodinma Iweala, Chris Abani, Delia Jarrett-Macauley, Helen Oyeyemi and Yaba Badoe, for the marked attention they pay to children. Previous works by African authors had featured child characters (Camara Laye’s 1953 autobiography of French colonial Guinea is a well-known case). Yet not until the publication of Okri’s The Famished Road in 1991 did many African novelists use a child’s perspective for an entire novel, or think sensitively about what distinguishes children from adults.

In conducting my research, I especially found surprising the extent to which recent West African novelists utilize a diversity of cultural references in their representations of children. Whereas earlier writers such as Laye mostly situated their child characters in recognizably “African” settings and alluded to local myths, more recent writers seem comfortable employing African and western traditions. For instance, my first chapter explores how, alongside indigenous folklores, Ben Okri draws on the British Romantic writers with whom he shares a strong association between childhood and creativity. The last chapter similarly sees Helen Oyeyemi’s writing as informed by her complex personal experiences as a half-Nigerian, half-British woman in the UK.

Another interesting thread of the thesis concerns the portrayal of children as autonomous agents. In my second chapter, I argue that novels about African child soldiers frequently depict young people as having difficulty making independent decisions. This may serve in the novels to promote a narrative of humanitarian “rescue,” highlighting the innocent and powerless child. By contrast, the subjects of my third chapter, Oyeyemi and Badoe, provide ample opportunity for reflecting on the strategies children have to resist adult prejudices and power.

So, in how they depict children, the novelists encourage us to reflect on our own biases and assumptions. How do we see children? What traits do we ascribe to them? And how might these conceptions be directing our behaviour? The thesis carefully resists narratives about the “universality” of childhood, seeking to draw out cultural and historical particularities. Still, when it comes to children, it finds that many of us–regardless of cultural background–think alike. 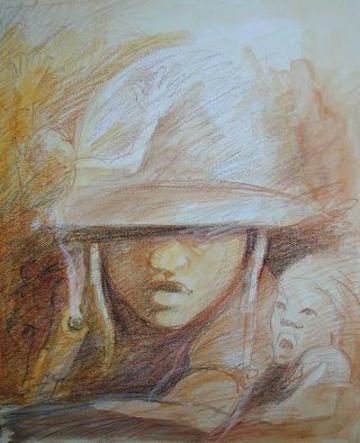