While much has been said about the socio-political and socio-cultural import of memory work in post-conflict contexts, not much critical work has broached the subject under the rubric of justice. How might countries remember histories of violence in ways that facilitate the pursuit of justice? What might a just mnemonic practice entail for communities in the wake of atrocities?

In his academic monograph, Nothing Ever Dies: Vietnam and the Memory of War (2016), Vietnamese American critic Viet Thanh Nguyen advances the notion of just memory when assessing the legacies of the war in Vietnam and the ongoing mnemonic war between America and Vietnam. As Nguyen elaborates, just memory “strives both to remember one’s own and others, while at the same time drawing attention to the life cycle of memories and their industrial production, how they are fashioned and forgotten, how they evolve and change” (12). Just memory accepts as its foundational premise the “impossibility of total memory,” and thus, the ethical exigency of multifarious perspectives, narratives, and voices (8). It seeks relentlessly to resurrect “what might be forgotten, accidentally or deliberately, through self-serving interests, the debilitating effects of trauma, or the distraction, offered by excessively remembering something else” (17). Ultimately, just remembrance draws its sustenance from “an ethical awareness of our simultaneous humanity and inhumanity, which leads to a more complex understanding of our identity, of what it means to be human and to be complicit in the deeds that our side, our kin, and even we ourselves commit” (283).

Insistently calling into question the national/nationalistic politics of commemoration in both America and Vietnam since the end of the protracted war, Nguyen espouses a more expansive ethical vision that takes into account not just memories of the self but also those of others. Foregrounding mechanisms of memory production, he stresses how unequal industrial power between countries brings about forms of mnemonic inequality. Here, Nguyen strategically moves away from some strands of memory studies that fixate on traumatic memories of the nation, which might inadvertently forestall the task of peace building. He also urges us to be vigilant about unequal industrial access to memory and hence, the production of unjust remembrance in the aftermath of atrocities. The mode of justice, as it figures in Nguyen’s formulation of just memory, is decidedly restorative. Key to a conciliatory culture of commemoration, such a restorative form of justice seeks to repair historical wounds by transcending the binary politics that polarizes all conflicts. Its backward glance at the past notwithstanding, just memory is inevitably future-oriented. Might this renewed account of memory work not point to a cosmopolitan future for post-conflict communities?

Kelly Tse was a speaker at the conference ‘Post-War: Remembrance, Recollection, Reconciliation’ at the University of Oxford on Saturday 26 May 2018. 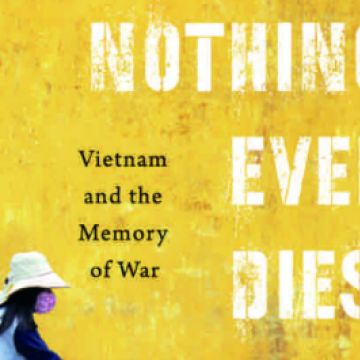