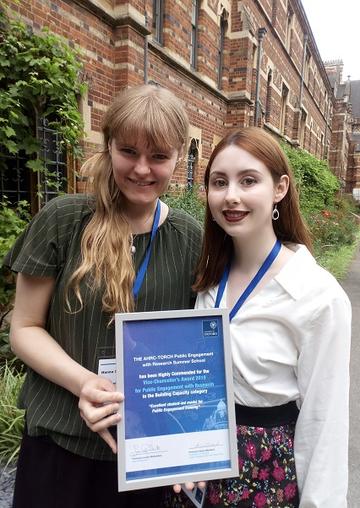 The Summer School was established in 2015 as a student-led initiative, one of three designed and delivered over the course of a year by two AHRC-TORCH Graduate Project Coordinators appointed from amongst our population of DPhil students and early career researchers. The aim of the Summer School is to build capacity by equipping the next generation of Humanities researchers with the skills and knowledge to embed public engagement into their research. To date, nearly 100 researchers from the Universities of Oxford and Cambridge and the Open University have participated in the summer school and 13 individual PER projects have been established.

The Summer School has now become a flagship initiative in the Researcher Development and Training Programme, led by Dr Caroline Thurston. We celebrated the receipt of this year’s award with Hanna Smyth and Dr Lidia Domingues (right), Graduate Project Coordinators in 2017-18.

The AHRC-TORCH Public Engagement with Research Summer School’s week-long programme consists of workshops, talks and small group sessions organised thematically to equip participants with the wide range of skills needed to effectively engage the public in a variety of different ways. Sessions are led by an extensive network of PER practitioners from within and outside Oxford and by experts providing related skills training such as creating podcasts, storytelling, and presenting on TV and radio. Through this diverse and intentionally cumulative programme, participants acquire the ability not only to conceptualise and understand the nature of public engagement but also to identify and segment their ‘public’, communicate their research with clarity and creativity, build relationships, prepare grant applications, and, ultimately, pitch a PER project that is feasible, specific, impactful and evaluable.

Since 2015, seed funding totalling £5,000 and in-kind support have been awarded on a competitive basis to 13 projects spanning a wide range of subjects, formats and aims. These projects have included:

The AHRC-TORCH Public Engagement with Research Summer School runs in the second week of July on an annual basis. Applications for next year’s Summer School will open in January 2020 and will be advertised under ‘opportunities’ on the Researcher Development and Training webpages.