In times of trouble, of fear and of loss; in times of joy, and exasperated glee. When we as humans feel emotions to eager extents, we look to the stars for hope, solace, or perhaps to count our luck. Andromeda, written by Hannah Greenstreet and directed by Charlotte Vickers, captures this phenomenon that has always encapsulated us and places it into a heartwarming, yet equally heartbreaking modern context.

The story opens with a retelling of the classic mythology tale, introducing Andromeda (Andy) and Perseus (Percy), portrayed by Nina Singh and Rosie Gray respectively, immediately leave an impression that follows through the entire performance. Moving from the Greek story into the present world, we’re introduced to the characters as they’ll stay for the rest of the performance.

Andy can’t find her place within the world without being true to herself, but that may come with the risk of losing her family. Percy, who sees her outside a club by herself and starts up the conversation, serves as the metaphorical rock in the story. Whilst stable in her identity, rocks can be sharp and hurt and Percy’s want to progress their relationship out of Andy’s comfort is what proves to be one of the conflicts that permeate the story.

In a strange mix of traditional and contemporary, they do not remove the original mythological tale from Andy and Percy’s story, rather using it to enhance the themes and bring a different take to the vices and virtues of familial love, sexuality and female empowerment. There’s a fine line between having comedy in an otherwise meaningful performance and having a comedic play, and this show really stuck true to having elements of comedy that didn’t shadow the more pensive moments, which truly made those melancholy moments more poignant.

A story describing an archaic tale manages to not make its characters anachronistic. They fit perfectly in the world we know; we’ve all met an Andy and a Percy. It makes the performance all that more heart-wrenching, that we can imagine ourselves up there, or a family member, a beloved friend.

The conflict of an out-of-the-closet lesbian and a woman coming to terms with being bisexual transpires onto the stage in an eerie way. That does not mean we have a victim and someone in the wrong. We can all identify with both aspects of Andy and Percy’s story. Whilst Andy can’t live her life in full for fear of exile, Percy can’t live hers being hidden in love. Balance, we find, is a haunting thing when it’s shown to both of its extremes.

It’s rare that I see myself in content on the screen or in the spotlight, but As someone who has struggled with the fears of coming out not only to myself, but to friends and family, I could absolutely see myself represented on that stage. All the fears of being seen as an ‘other’, as someone different. But the need to be seen as who you are, to be respected as an individual and not as a facade. For too long, queer characters, whether in gender or sexuality, have been made out to be villains or creatures in the closet, yet here was a story of two women that are neither.

Nina Singh and Rosie Gray characterise the characters of Andy and Percy with such eloquence and anguish. For a performance consisting of two people, not once does it feel empty or slacking. Their energy fills the stage with much vigour, we are emoted as an audience to feel their happiness, their love and their pain even more.

Some moments felt they appealed to an audience that wasn’t the target, and were such an odd moment of awkwardness in otherwise serene viewing. At times there was a struggle trying to figure what period of time in their relationship we were witnessing. Other times dragged on to an uncomfortable extent, only noticeable with hindsight when trying to recount the performance.

Minor problems in an otherwise eloquent script and piece of entertainment that did more than that. I know myself and many others learnt something about greek mythology and the stars within this play, not even counting the many who will have identified with the characters and seen themselves on a medium they haven’t before.

Kind, but honest. Beautiful with its flaws. Andromeda tells a beautiful story of two young women in vastly different worlds, navigating through their personal lives and position within society. However close or far apart they find themselves to be from each other, they were always under the same shining stars. 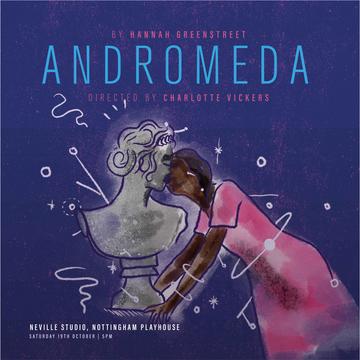