This report was first published on the Oxford Centre for Life-Writing blog.

A selection of podcasts from the symposium are available to watch.

David Hare’s Richard Hillary Memorial Lecture at the Blavatnik School of Government on 3 March, offering a “playwright’s view of dismal conservatism” that turned into a scathing invective against the (Oxford-educated) key players in the current Tory government, was yet another poignant reminder of the distinctly political edge that has always marked performances of the authorial self. It certainly underscored the relevance and timeliness of a one-day symposium dedicated to exploring the complex and multi-layered intersections of literary celebrity and politics, which took place two days later at The Oxford Research Centre in the Humanities. Generously supported by the TORCH Celebrity Research Network and the Austrian Science Fund, “Art and Action” joined the debate about writers’ migrations between literature and politics – a phenomenon that is closely tied to the idea of the artist as “hero-explorer”, as the eponymous character in J.M. Coetzee’s novel Elizabeth Costello puts it. In this present ‘Age of the Celebvocate’, such writerly cross-field migrations have become familiar multi-media events that highlight the possible tensions between authorial self-fashioning and media and industry appropriation. They come not without their risks of compromising artistic integrity and sometimes lead to a rather uncomfortable entanglement of the author’s public and private selves caught up between ideals of moral responsibility and marketplace considerations.

These wider debates were addressed by eight thought-provoking papers and a lively roundtable discussion that cast an intriguing spotlight on the interactions of authorship, politics, and celebrity culture in the Anglophone world across historical periods and media. Case studies ranged from the early modern period to the present and covered a broad spectrum of themes, including performances of authorial self-fashioning, the gender, body, and fashion politics of literary celebrity, and the convertibility of ‘celebrity capital’.

Michelle Kelly and Sandra Mayer opened the symposium with a panel that focussed on the celebrity writer’s often uneasy trajectory between aesthetic and political performance. Both papers laid bare the theatricality of such ‘double acts’ in writers’ interventions as public personae and in the fictional worlds they create. Drawing on material from the Coetzee Archive, Michelle Kelly in her talk explored the ways in which J.M. Coetzee’s celebrity status and dedication to animal activism inform his novel Elizabeth Costello and its preoccupation with the body, performance, and theatricality. Frequently interpreted as Coetzee’s fictional avatar, Elizabeth Costello, whose concern with animal death and suffering is a recurring theme in her public lectures, becomes a performing animal in a literary marketplace that expects her to live up to the roles of celebrity novelist and public intellectual. While 21st-century audiences seem to take Coetzee’s conflation of the author’s public and private selves for granted, their Victorian counterparts were puzzled and intrigued by the dual commitment to art and action of author-cum-politicians like Benjamin Disraeli. Looking at ‘fan letters’ among Disraeli’s personal papers in the Bodleian Library, Sandra Mayer demonstrated that his position in the popular imagination was shaped and sustained by a highly ambivalent performance of the self that reconciled political action and creative achievement.

The gendering of authorial fame and its media representations was the theme uniting the second pair of papers by Kate McLoughlin and Matthew Lecznar. The story of Ernest Hemingway’s and Martha Gellhorn’s D-Day dispatches for Collier’s Magazine, presented by Kate McLoughlin, offered captivating insights into the personal and textual rivalry of two high-profile writers for whom the right to write about war was earned through first-hand experience. The magazine’s editorial interventions were aimed at presenting Hemingway as a war hero and provide an illuminating case study of the privileging of an eye-witness account by a male ‘national treasure’ over the report by a female war correspondent. The unsettling (non)visibility of the female body was also a central concern of Matthew Lecznar’s paper on the fashion and body politics of Nigerian author Chimamanda Ngozi Adichie. Her dynamic and self-reflexive use of fashion and femininity is played out in a transmedia space of fiction, fashion blogs and TED talks that enables her to engage with a broad range of political issues and disseminate her message across diverse cultural and socio-economic contexts.

Over lunch, the third-floor corridor of the Radcliffe Humanities Building was abuzz with lively conversations before speakers and audience reconvened for the afternoon’s first panel on the “Artist as Propagandist”. Kate De Rycker and Simon Morgan offered compelling historical case studies of how writers in the 16th and 19th centuries respectively made use of their celebrity capital to engage in political activism and persuade the public. Kate De Rycker’s talk on the “Rhetoric of Fame” employed in the ‘paper war’ between the fictional persona of “Martin Marprelate” and the established Church revealed that the social role of English writers in the late 16th century was increasingly affected by the commodification of the writer’s reputation. By availing themselves of strategies that still inform the production and consumption of celebrity today, such as the creation of recognisable public personae, Marprelate and his detractors fashioned a template for new forms of engaging in political debate and mobilising the reading public. The convertibility of celebrity capital was subsequently highlighted by Simon Morgan, whose paper explored the tensions within the transatlantic anti-slavery movement “Between Morality and the Marketplace.” Looking at popular responses to Frederick Douglass’s and Harriet Beecher Stowe’s visits to Britain in the mid-nineteenth century, it pointed towards the close entanglement of celebrity activism, self-promotion, and commercialisation.

The day’s final pair of papers cast a spotlight on the often symbiotic conflation of literary celebrity and the politics of self-fashioning. Michèle Mendelssohn made a case for reconceptualising Oscar Wilde – often hailed as an exclusively queer icon – as a media professional who, on his 1882 American lecture tour, skilfully harnessed his gender fluidity in order to enhance his celebrity appeal. Authorial self-fashioning as a more overtly political act was addressed by Adam Perchard in his exploration of Salman Rushdie’s self-fashioning as the ‘new Voltaire’. Perchard argued that by placing himself within an invented tradition of eighteenth-century thinkers, Rushdie invokes simplistic East/West binaries in which Western Enlightenment tradition is threatened by Islamic fundamentalism.

At the end of a long day of discussing art and action, the recurring themes of the symposium were revisited in a roundtable featuring Peter McDonald, Caroline Davis, and Olivier Driessens, and chaired by Elleke Boehmer. Reviewing the intersections of authorship, politics, and celebrity from a broad range of theoretical and methodological perspectives, the expert panel launched a general plea for institutional readings of literary production that abstain from fetishising the author as a lone genius and acknowledge his/her embeddedness within a network of agents. Peter McDonald opened the conversation by posing the key question of the day: “Why are we having this discussion and what does it tell us about our culture?” The answer, according to McDonald, lies in the ambivalent status of literature as a form of public discourse uneasily positioned between the histories of thought, entertainment, and taste. Caroline Davis then offered poignant insights into the gatekeeping position of publishers in the process of enabling or inhibiting cross-field migrations between literature and politics. Looking at the ‘repackaging’ of African authors for the UK and US markets, she drew attention to the fine and arbitrary line between literary celebrity status and being completely silenced. Finally, Olivier Driessens reiterated the importance of collaborative efforts for the creation of literary reputations and encouraged scholars to pay attention to institutions of cultural diplomacy, promotional logics, ideologies, and genre, all of which shape the author’s position within the ‘Art Worlds’.

The roundtable statements gave rise to a stimulating discussion that raised some crucial questions about writing and reading as social practices that can never be isolated from their political dimension and impact. Literature, it emerged, must be regarded as a mode of public intervention in its own right, strikingly exemplified by what Peter McDonald referred to as J.M. Coetzee’s “Celebrity of Refusal” – his unwillingness to step out of his medium and play up to the demands of literary celebrity culture. Most importantly, the symposium flagged the interdependence of authorial agency and processes of industry, media, and audience appropriation, pointing towards ways of how we might keep a healthy distance from the seductive pull of the celebrity author.

Sandra Mayer is an Erwin Schrödinger Research Fellow (Austrian Science Fund) at the University of Vienna’s English Department and Wolfson College, University of Oxford. She is currently working on a monograph that focuses on the intersections of authorship, literary celebrity, and politics in nineteenth-century Britain. http://www.sandramayer.org/ 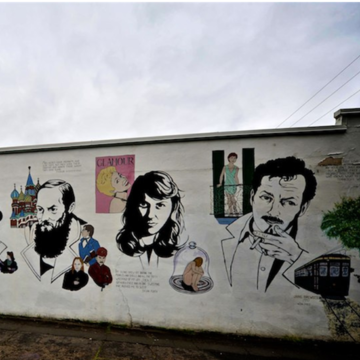