The architecture critic Charles Jencks once described Daniel Libeskind as ‘a poet who can present the unpresentable’. As we move in our Post-War series from the Textual strand into the Monumental one, Jencks’ thoughts – and Libeskind’s visit to Oxford on 9 February – seem pertinent. Again and again in our discussions so far we have been confronted with the problem: whether language can ever be sufficient to mark suffering that has occurred during or after conflict? But as we begin to consider monuments, buildings, environments, a whole new set of questions emerges, because to encounter a space is clearly a very different experience to encountering a text. And when we think about commemoration, oftentimes (at least in a British context) we think about standing in a group around a monument like the Cenotaph (literally ‘empty tomb’) in London, probably in silence. What happens to you in these silent moments? What is it like to encounter that empty space? What might it be like to design and build it?

Or perhaps this kind of monumental commemoration is a mistake. Perhaps – and it seems perverse to say it – we dwell too much on the past when we commemorate, and don’t think enough about the future.

Although Daniel Libeskind has been responsible for many different kinds of projects, he is perhaps best known for his buildings of memory, such as the Jewish Museum Berlin (1989-2001), the World Trade Center Master Plan (2003-present), the Imperial War Museum North in Manchester (1997-2001), and his most recent Holocaust monuments in Ottawa (2015-17) and Amsterdam (under construction).

All of these works reflect on the relationship between the past and the present, whilst thinking forward into the future. The Ottawa memorial commemorates, but it also acknowledges the survivors of the Holocaust. Architecturally, the Jewish Museum enacts an uneasy dialogue between its shiny titanium-zinc façade and the Baroque Kollegienhaus, prompting the visitor to consider how the history of Berlin informs the way they negotiate the city, especially since they have to enter the museum through the much older Kollegienhaus (the museum itself has no front door) and thus pass through layers of history and memory. It is this kind of design that marks Libeskind’s museums and monuments off from other commemorative buildings. The visitor who walks through the Void – an unheated, barely lit, empty space that runs, fragmented, through the middle of the building – or enters the near-dark Holocaust Tower, is taking part in a commemorative act, even if that experience is radically different from how they might have thought about commemoration before.

Unlike the empty space of the Cenotaph, which is hidden away from view, the Void at the heart of the Jewish Museum is a place that we do enter, whether we want to or not. In spaces like that one, in the Tower, or in our attempts to peer out of the irregular windows, we are confronted not only with history, but with ourselves, which can be the most disorienting feature of all. As Libeskind himself writes, the building is ‘an individualized mirror, which each visitor c[an] read in a different way.’ Rather than forcing the visitor to behave in a certain way as they make their way through the building (a criticism that has been levelled at Libeskind’s design), the physical space opens up mental and even spiritual space for contemplation. Rather than denoting, the building connotes (a favourite device of poetry), allowing the participant – or reader of the space – to make connections between past, present and future that otherwise would not be available to them.

Libeskind’s buildings are all about life and the way we live. They challenge our usual definitions of commemoration and commemorative practices, and in the way they provoke us, they make us think again about whether peace and reconciliation should actually be an end of commemoration. And in its capacity to consume its viewer or participant, Daniel Libeskind’s work recalls what one of his favourite writers, Emily Dickinson, says about remorse: it ‘is Memory – awake – […] It’s Past – set down before the Soul/And lighted with a match –’. 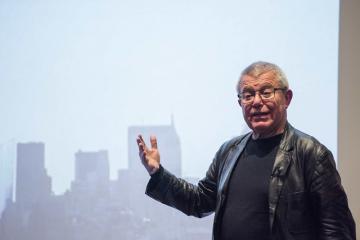