In 2013, a Prospect magazine profile of the UKIP leader Nigel Farage described the Brexiteer’s party in Chaucerian terms:

UKIP is indeed a rag-tag bag … of cussed, contrary, wilful, protesting, obstreperous, bantering Englishmen and women, the like of which have been with us all the way back to The Canterbury Tales … the descendants of the brazen and garrulous Wife of Bath and the boisterous but genial Harry Bailey, Chaucer’s Inn Keeper. These are very English archetypes …

This notion of the quintessential ‘Englishness’ of The Canterbury Tales (1387), authored by the ‘Father of English Literature’, has a long history. In 1400, Geoffrey Chaucer was buried in Westminster Abbey simply because he lived in its precincts; but 150 years later, he was reburied in a grand new tomb as the founder member of Poets’ Corner, becoming, almost literally, the cornerstone of English literature. Poets such as John Dryden claimed him as the ‘father of English poetry’, adding that his most famous poem, The Canterbury Tales, represented ‘the whole English nation’.

Victorian writers, wedded to the essential Englishness of Chaucer, asked: ‘Who is an Englishman more English than Chaucer?’ His genius, they agreed, was ‘English to the core.’ In the 20th century, G K Chesterton took Chaucer’s vaunted Englishness to new levels, claiming that: ‘Chaucer was the Father of his Country, rather in the style of George Washington.’ More recently, the blurb of Peter Ackroyd’s Chaucer: Brief Lives (2004) describes The Canterbury Tales as ‘an epic of Englishness’, while Ackroyd calls Chaucer ‘the genial and smiling emblem of Englishness’.

This mantle of patriarchal Englishness would have seemed distinctly odd to Chaucer himself. Chaucer was able to transform English poetry the way he did precisely because of his internationalism, not his nationalism. Like all educated men of his day, he was multilingual. He devoured late-antique philosophy, Latin translations of Arabic scientific treatises, and French love poems. His unusually good knowledge of Italian – and his travels to Italy – allowed him to access the latest poetry of Dante, Boccaccio and Petrarch. Indeed, Chaucer’s very fascination with vernacularity was a European phenomenon: Dante and Boccaccio’s championing of Tuscan vernacular inspired Chaucer to see what he could do with his own.

The influence of these Italian poets changed what English poetry could do. Chaucer’s development of the pentameter, for instance, the 10-syllable, five-stress line that became the building block of English poetry, was inspired by an Italian poetic line (the endecasillabo). And it was Chaucer who first translated a Petrarchan sonnet into English.

This internationalism belies the idea of the ‘English archetypes’ of the Canterbury pilgrims that has seeped into the popular imagination. Far from being a UKIP-member prototype, Chaucer’s Wife of Bath is based mainly on a figure called La Vieille from the French Roman de la Rose, and on stereotypes from Jerome’s Latin Adversus Jovinian. And the idea of a group of people telling stories has multiple sources, notably Boccaccio’s Decameron. Most of The Canterbury Tales doesn’t even take place in England: the settings range from central Asia to Syria to northern Italy to Flanders. And very few have any English sources.

Chaucer’s earliest trip to mainland Europe was in 1359, when, as a teenager, he fought in the Hundred Years’ War and was taken prisoner near Reims. In later years, he visited Navarre, now in northern Spain but an independent country in the 14th century – a multicultural community where Jews, Christians and Muslims co-existed relatively peacefully. He made two trips to Italy on diplomatic missions, visiting Lombardy, Florence and Genoa. And he frequently went to France, negotiating treaties and marriage alliances. Indeed, parts of modern-day France – including Calais and Aquitaine – were under English rule at this time, and the borders between the countries were constantly changing.

But Chaucer did not need to go abroad to have an international outlook, since English mercantile and aristocratic culture was profoundly European. Chaucer came from a wine-merchant family whose wealth was dependent on the traffic between France and England. Born in Vintry Ward, London – the area of the city with more immigrants than any other – the young Chaucer was brought up seeing the ships come and go on the Thames. Spices from Indonesia, furs from Russia, glass and paper from Italy, timber, grain and metal from Baltic lands, were all available in the markets and shops of late-14th-century London. The world trade system was advanced and complex, and land and sea traders crisscrossed Asia, Africa and Europe. As a child, Chaucer would have been aware of a vast global economy.

When Chaucer worked for the king’s sons and later the king, he slid easily into the internationalism of court life. Queen Philippa of Hainault and Queen Anne of Bohemia had extensive retinues from their homelands in tow, including poets who mainly wrote in French, and Chaucer himself married a woman whose family came from Hainault (a country now subsumed into France and Belgium): Philippa de Roet.

In political life, whenever issues of English national identity flared, filtered through monopolist ambition and xenophobia, Chaucer was always on the side of internationalism – we might even say globalisation. In the 1370s, London merchants, outraged that Italian merchants were gaining advantages in the lucrative wool trade, sought an English monopoly. In the so-called Good Parliament of 1376, MPs denounced these Italians as sodomites, secret Jews and Saracens, as they attempted to push them out of the wool trade. Earlier in the decade, Chaucer had travelled in company with Italians to Genoa, precisely to try to negotiate a trade deal that would have allowed the Genoans to circumvent the monopoly and have their own trading base on the south coast. He was working for John of Gaunt, a firm opponent of the London monopolists.

Chaucer’s own version of Englishness certainly did not mean driving out or excluding other Europeans: he spent his life negotiating and working with them. From 1374, Chaucer served as comptroller for the wool custom, at the heart of England’s international trading system. He regularly associated with men such as Matthew Janyn, an Italian who gave huge loans to the king; Richard Lyons, the part Fleming controller of the petty custom and an old friend of his father’s; and Jacobi Provan and John de Mari, Genoans in whose company Chaucer rode to Italy. Appropriately, from 1374 until 1385-6, he lived and worked on physical thresholds – his home above a gate on the city walls, his office on the riverbank – looking into London and then out to the rest of the world.

Chaucer bore very little resemblance to the dull patriarch depicted on the covers of so many books about him. He was a child in the seething streets of London, a young man crossing the mountain passes of the Pyrenees, a maturing diplomat avid for Italian poetry in Pavia and Giotto’s frescoes in Florence, a courtier to a Bohemian queen, a husband going home to his Hainuyer wife. He was also a poet who wrote about the markets of Paris and Bruges, the tyrants of Lombardy and the court of Chinggis Khan, even the dream of travelling to outer space. Nurtured by the writings of Ovid, Boethius, Dante, Machaut and Boccaccio, his imagination soared beyond borders. To call Chaucer the father of English literature not only misrepresents him, but also sells him short. He should be celebrated as one of the great European poets. 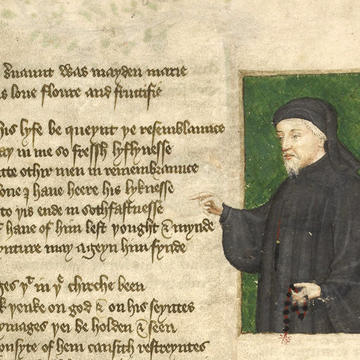 A portrait of Geoffrey Chaucer from the Regiment of Princes, c1400-1450. Courtesy the British Library