The Evidence Based Practice Unit (EBPU) at the Anna Freud National Centre for Children and Families and Faculty of Brain Sciences at UCL,  joined forces with Oxford University's Faculty of Philosophy last week to host a cross-disciplinary workshop of key experts. The aim of the workshop was to explore the best ways to theorise what constitutes a good outcome in child and adolescent mental health, and how this might be captured and measured by those supporting children’s mental health and well-being. Invited to join the working group was a mix of child mental health specialists, sociologists, psychologists, historians, psychometricians, philosophers and youth advocates, who each presented their view on the question. The event was funded by a grant from TORCH (The Oxford Research Centre for the Humanities).

The workshop was led by Dr Edward Harcourt, Fellow and Tutor in Philosophy at Keble College, Oxford, and  Professor Miranda Wolpert, Director of EBPU and of the Child Outcomes Research Consortium. Miranda said:
“I came away inspired by the range and breadth of thinking across disciplines. I was struck by the fact that we had more in common in our views on the challenges and issues than there were difference between us. I look forward to taking this work forward with colleagues in a larger symposium open to all we’re planning in Spring 2017.”

Three key themes emerged from the days’ discussions:
1. The differences between well-being and mental health as distinct but overlapping concepts
2. The limitations of current philosophy in terms of a focus on adult rationality as underpinning a good mental health outcome
3. The complexities and challenges of psychometric measurement in this area, including the difference between measuring positive mental health and well-being versus mental health problems

The discussions from the day were captured fantastically by Tem and Fede of www.temjam.com in the illustration below.

The group plans to reconvene in March or April 2017 for a larger cross-discipline event in Oxford which anticipated including input from children and young people.
Further information on EBPU can be found here.

This post can also be viewed on the Anna Freud National Centre for Families and Children website. 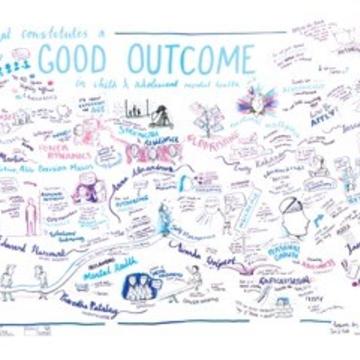