CROSSING THE BORDERS OF UTOPIA 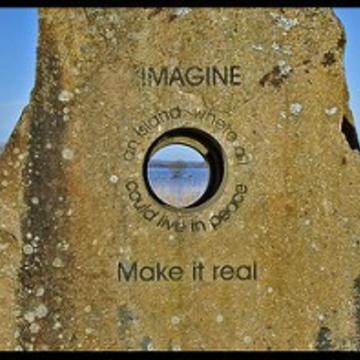 It’s very good to be here today at Torch to respond to the Storming Utopia project. Because a lot of my work looks at what it means to cross borders (between places, languages and histories), I thought I’d speak today about what it would mean to cross a utopian border in a place of learning like Oxford. I’m probably interested in borders partly because I grew up near one. This is a picture of the place where I grew up:

In my academic work, I’ve often encountered the metaphor of a fluid border, but this is a picture of a literal fluid border, as the stretch of water in the picture forms the border between Northern Ireland and the Republic of Ireland, soon to become the border between the United Kingdom and the European Union. The interview in this video explores some of the concerns of local people about the coming change to the border:
https://www.youtube.com/watch?v=8cDjT0r9IgM
(To be played up to 1.34 if possible)

I think John Sherridan’s comment ‘it works a hundred per cent, because it doesn’t exist’ is a great definition of a utopian border, and this sense of a border which is both there and not there is very much part of the experience of learning in a place like Oxford. The yellow house you might have seen in the background of the video belonged to my grandparents, and the land around it was my grandfather’s farm. I want to draw on something my grandmother said about my grandfather on their wedding day to think more about the borders in and around a place of learning. This is a picture of my grandparents on their wedding day:

On that day, my grandmother, Maura McCaffrey (née Lily) said her husband Barney looked ‘very distinguished, like a teacher’. My grandmother was paying my grandfather a compliment by drawing on the meaning of ‘distinguished’ as ‘marked by conspicuous excellence’ and ‘having an air of distinction, stylish’. In doing so, she indicated that to be a person of learning is to be set apart in a good way. On the other hand, implicit in the compliment is the idea that learning is connected to ‘high standing (social)’ and might therefore be out of reach for some people.

Distinguished
1. Separate, individually distinct. Obs.
2. Clearly perceived or perceptible; clear, distinct; marked, pronounced. Obs.
3. Differentiated from others by character or quality; special, distinctive, characteris-tic. Obs.
4. a. Possessing distinction; marked by conspicuous excellence or eminence; remark-able, eminent; famous, renowned, celebrated; of high standing (social, scientific, or other). (Formerly of actions, occasions, reputation, etc.; now almost always of persons.)
b. Having an air of distinction, stylish; = DISTINGUÉ adj.
Oxford English Dictionary
To learn in Oxford is for many people to experience both these aspects of learning. Life in the Oxford archipelago can be like looking at this statue, which stands on the shores of the lake in the video:

Sometimes the experience of Oxford is like being in front of the statue in the first picture. It allows you to look through barriers and focuses your gaze on something very good. Although you might retain the sense that utopia is out of reach, it is very much in sight and seems to beckon you on. Utopia might not exist on any map, but I’ve been there in Oxford, though never by myself. I’ve been with my tutors, with my students and with my colleagues. I’ve been with my friends. But like many other people in Oxford, I’ve al-so felt how a slight shift in position leaves utopia out of sight as well as out of reach. At those moments, Oxford appears more as the statue does in the second picture. I know utopia is there, but I can only see barrier upon barrier. Although my presence here is the fruit of immense privilege, I have felt the barriers go up. I know from experience that Ox-ford can still be hostile to its female tutors, and I know from others’ experience that it still hurts and isolates its BME students.
In the light of such experiences, why come to study literature in a place like Oxford? Utopian thinking and literary thinking still seem valuable to me in this context, because they allow us to see new things and also to think about what stops us seeing. I want to look briefly now at a couple of examples of such literary thinking from two writers, one Russian and one Martinican, but both in a sense French, and both in a sense American. In his exploration of childhood, Antan d’enfance, Martinican author Patrick Chamoiseau writes that adults construct a mental shield between themselves and the ‘déflagration complexe, inconfortable, de possibles et d’impossibles’ of the real.  In doing so, he points to something beyond what we think we see, to a forgotten time when one dared to see the impossible and the possible in the real. When Vladimir Nabokov compares himself to ‘a medieval traveler who brings back from the East the faunal fantasies influenced by the domestic bestiary he possessed all along rather than by the results of direct, zoological exploration’, he points to the ethical and political consequences of failures to see beyond our own mental shields.  When Christopher Columbus encountered the Caribbean is-lands, he spoke of them in terms of stories he ‘possessed all along’ about mythical islands of cannibals, and so justified his cruelty to the people living there.
For me, the Storming Utopia project is very much in the spirit of Nabokov and Chamoi-seau’s writing, not just because it thinks through the complex relationships between ‘old’ and ‘new’ worlds, but also because it challenged me to see the new in the old and the old in the new in my own experience. It opened up new ways of looking at places I’d seen many times before: the Caribbean archipelago and the Oxford archipelago; physical is-lands and imagined islands. In doing so it offered me a rich series of images of the walls of Oxford as boundaries which both exclude and contain the good.