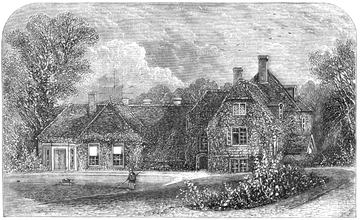 Illustration for a magazine article about a visit to Selborne, home of Gilbert White. Once a Week magazine, Volume 8, page 26.

An 18th century clergyman, White influenced Charles Darwin and William Wordsworth, and is widely regarded as the 'father' of both nature-writing and the science of ecology - his The Natural History and Antiquities of Selborne, first published in 1798, has never been out of print.

The programme is available here: https://www.bbc.co.uk/programmes/m000ktf4

Dafydd discusses love of God and love of place as White's two key motivations; White's influence on both romantics and scientists in an age that invented the myth of conflict between religion and science; and connections between modern environmentalism, the Age of the Anthropocene, and White's celebration of 'littleness' (including earthworms and his pet tortoise, Timothy) as part of his belief in a divinely ordered 'chain of nature'.

Dafydd's appearance was selected as 'Choice' for Wednesday 15th July 2020 in the Radio Times by critic, Jane Anderson:

"Radio 3 is to be congratulated on the wealth of new academic research they are bringing to us in a digestible format via the Free Thinking series. Tonight's subject is nature-writing and New Generation Thinker Dafydd Mills Daniel explains why Gilbert White, born in 1720, has influenced everyone from Charles Darwin to contemporary debate about human's impact on the planet."

Dafydd appears alongside, Dr Pippa Marland, University of Leeds, director of the Landlines project, and Lucy Jones, author of Losing Eden. The programme is presented by Eleanor Rosamund Barraclough, and produced by Robyn Read.

In 2018, Dafydd was chosen as a New Generation Thinker by the BBC and the Arts and Humanities Research Council (AHRC).

Each year, the BBC and AHRC select 10 New Generation Thinkers: early career academics working in the humanities, ‘who can bring the best of university research and scholarly ideas to a broad audience through working with the media’.