In an often overlooked scene in the Book of Margery Kempe, the spectacular “creature,” Margery, becomes the onlooker as she gazes in wonder at a group of women she meets on the way to Rome: “And the woman who had the image in the chest, when they came into good cities, she took the image out of her chest and set it in worshipful wives’ laps. And they would put shirts thereupon and kiss it as though it had been God himself” (Staley, 57). Margery is overcome with emotion as she watches these women. In turn, they take her in, giving her “a good soft bed.”

This passage never caught my attention until this year, as I have been re-reading the Book in the context of my dissertation on enclosure and prose form in Middle English. Months ago, I began researching these holy dolls, and, recently, their dresses, which, I've come to learn from Henrike Lähnemann and the conservators with whom she works, were in some cases backed by recycled manuscript material.

What impresses me most, the more I read this scene, is the way in which the material object brings all of the women together, away from the friars with whom they travel.

The doll, we come to find as we research surviving exemplars, is a world unto itself, containing wood, silk, parchment, leather, fur, pearls, and flakes of silver (Heilige Röcke. Kleider für Skulpturen in Kloster Wienhausen, ed. by Charlotte Klack-Eitzen et al., Regensburg 2013). The doll, carried in a chest on the back of a donkey that is led by a woman, becomes the center of a movable manger scene. Human and animal, animate and inanimate, heavenly and earthly unite in this scene of devotion.

What fascinates me about medieval claustration culture, into which Margery places herself even as she undertakes a pilgrimage, is the way in which small communities imaginatively recreated the world through such objects. Union with God allowed medieval women a glimpse of a world that was not structured by violence, endless pregnancy, or the drudgeries of manual labor. The inclusive use of every possible material to make the devotional objects used in the cloister was one of the ways the nuns could stay connected—physically and spiritually—with the outside world. In the local bodies of water, the nuns cultivated pearls.

More and more, as an instructor and researcher working from home, I feel cloistered.

At the beginning of the pandemic outbreak, I sent an e-mail. It was addressed to a group of friends who, I began to notice, were all thinking about and making art works that dealt in some way with the idea of enclosure—whether Rachel Rose’s film Enclosure on 17th century privatization of the commons, Clementine Keith-Roach’s exhibition Labours and her earlier casts of her body molded onto clay vessels from Turkey and Greece, or S. Billie Mandle’s recent book Reconciliation, in which she photographs confessionals in search of traces of human histories. I suggested that we come together on a video call soon to discuss the topic, and, a couple of weeks later, an informal research group was born.

These discussions are unlike any other I have encountered in my many years of teaching and studying. Poet Claudia Rankine recently visited UC San Diego to deliver a talk in which she mentioned that for her, conversations are like objects we make with one another. Without the structures and pressures often inherent in discussions held within formal academic settings, the conversations of the informal “enclosure group” have felt more like the traveling holy dolls than like the fixed church pew. I go into each meeting without any sense of where the members of the group will want to go with the readings for the day. I wonder to myself, what will Lakshmi say?

The group is made up of a few medieval and Renaissance scholars and artists working across a range of practices: a gallerist, a painter, photographers, a ceramicist, a sculptor, a filmmaker, two fashion designers. The contributions are as diverse and rich as the various media in which the artists work.

For our third meeting, I invited Lähnemann, whose writing on texts and textiles, along with a recent presentation "The Joys of Enclosure," I had recommended to the group. Lähnemann decided to center the discussion that day, “The Art of Enclosure,” around the Wichmannsburg Antependium, a remarkable altar frontal produced by the nuns of the Cistercian Abbey of Medingen.

This collaboratively produced work of art, like the holy dolls, quilts together a world of material objects that symbolize the contributions of diverse community members. What I notice more than the central figure of the risen Christ, in looking at the antependium, is the concentration of people along the bottom of the frame. They are small, and blend into the golden frame of the piece. Like Mary in the manger, they are intermingled with animals. Unlike the biblical figures and saints depicted in individual floating circles, they have whole bodies. They stand on the ground. Unlike the venerated figures above them, they appear to be moving. The lambs dance.

Huddled together, they are making something, sending, as Lähnemann notes in her presentation, songs and prayers up to God. They wave banderoles (manuscript scroll or “speech bubbles”) written in low German, which complement the Latin text found elsewhere in the antependium.

The group’s attention was drawn up a bit further to a woman who climbs a ladder to reach Christ, carrying with her a banderole that reads, from Song of Songs 7:8, “An dessen bom wil ik stighen unde de vrucht” or “I will climb this tree and (grasp) this fruit.” This climbing woman, like Mary herself, speaks the vernacular. She is placed, physically, in the position of the intercessor, halfway between the people and Christ.

This quilted world tells us how this community of nuns saw the heavenly and earthly realms working in harmony, how text and image were stitched into one another, and how the vernacular could express a holy form of desire. It also tells us something about how these women saw themselves in the world, as united with the laypeople, but also ascending the ladder, seeking a better place.

Fiona J. Griffiths closes her intriguing study Nuns’ Priests’ Tales: Men and Salvation in Medieval Women’s Monastic Life with a reflection on this antependium. For Griffiths, this textile production was a way to claim a place “at the contemporary altar—the most potent physical symbol of their exclusion from the priesthood and their reliance on ordained men” (191).

Devotional objects, fused with manuscript materials that were themselves produced through a combination of work and prayer in the enclosed community, become sites in which individuals can reimagine both self and community.

As we look back on these material histories, we find new opportunities for seeing how women—and other groups of people who have been excluded from dominant histories of art and literature—were already there, contributing in ways we have yet to fully appreciate. I can think of no better symbol for this potential than the Christ doll held at the Staatliches Museum, across which runs a manuscript inscription referring to the relic of the true cross.

For now, we will have to study these objects and manuscripts from home, on the too-familiar screen. But we may, like the Cistercian nuns, also take this opportunity to imagine new ways of building our communities. Like the women who make a bed both for Jesus and for Margery in Chapter 30 of the Book, we may find new ways of sharing space with, and caring for, one another.

Stacie Vos is a PhD Candidate at UC San Diego and a Lecturer in English at University of San Diego. Her dissertation, Englishing the Virgin: Enclosure and the Making of English Prose Style explores the relationship between Marian devotion, prose form, and the shaping of self and community in late medieval and early modern English literature. She holds a Master of Divinity from Yale University and is a 2020-2021 Ahmanson Research Fellow at the UCLA Center for Medieval & Renaissance Studies. 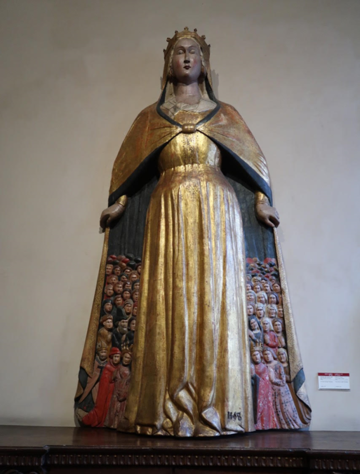