Open any book bound before the 18th century and there is a good chance that you will find fragments cut from another book and re-used to support the binding or to protect the pages from the wooden boards. Often this binder’s waste will be taken from printed books, but in many cases the added strength of parchment made it more effective to chop up a medieval manuscript. A remarkable proportion of medieval binding fragments have musical notation on them—music went out of fashion, liturgies were proscribed, and large choirbooks provided a more versatile format for dismembering than a smaller text-book. Very few complete music books have survived intact from the Middle Ages, and so it is small wonder that musicologists have been working on medieval binding fragments ever since the birth of their discipline. A conference at Magdalen College on 19–21 March 2018 brought together almost 50 specialists to discuss the particular problems raised by disiecta membra musicae.

Margaret Bent opened proceedings with a tour d’horizon of the many vicissitudes affecting manuscripts over time. As founding director of one of the first ever manuscript digitisation projects, DIAMM (the Digital Image Archive of Medieval Music, which in its early days had the specific purpose of gathering images of polyphonic musical fragments, she could demonstrate the range of applications and innovations which have been used to make worn texts visible again, and to connect fragments cut from the same book and now strewn across the world. These techniques reached previously inconceivable levels of sophistication in Julia Craig-McFeely’s presentation on her latest advances in digital restoration.

Several speakers covered the pleasures and pitfalls of gathering information on musical fragments. Paweł Gancarczyk considered polyphonic fragments from late-medieval Bohemia, and the extent to which they can be associated with the Utraquist brotherhoods from which many complete manuscripts survive. Jurij Snoj has systematically searched through all the libraries in Ljubljana, and most other collections across Slovenia, to produce a database listing more than 550 fragments from around 140 manuscripts. A catalogue of a comparable number of sources from Hungary was published in 1981, but many more have come to light since that date, and Zsuzsa Csagány discussed the means of updating the older records for a new database. In the Nordic countries the scale is altogether greater, with some 50,000 fragments now accounted for in databases in Norway, Denmark, Finland and especially Sweden: Sean Dunnahoe provided a helpful overview of what can and cannot be said by means of statistical enquiries of the Swedish database of medieval fragments, MPO (Medeltida Pergamentomslag/Medieval Parchment Cover Database). The biggest project to date, building on the success of the Swiss manuscripts website e-codices, is Fragmentarium, deftly presented by its director Christoph Flüeler.

It was through e-codices that Susan Rankin came across images of an unusual 10th-century fragment used as a wrapper for documents and preserved in the Swiss nunnery of Müstair. In its format and content it relates to no other manuscript, and thereby raises important questions about the assumptions we make when assigning other fragments to particular types of book which happen to survive in complete form elsewhere. David Hiley took a similar line in discussing fragments of saints’ offices, which might have been attached as easily to codices of saints’ Vitae as to antiphoners. In the case of notated songs, Helen Deeming demonstrated that fragments sometimes assumed to be witnesses to a widespread tradition of song anthologies in medieval England are just as likely to have come from miscellanies of prose and verse.

Reinhard Strohm took a seemingly incongruous collection of musical materials in MS 5094 of the Austrian National Library, and demonstrated that there may in fact be more connections between them than first meets the eye. Other presentations included Daniele Sabaino on the annotations to a charter in Ravenna which may well constitute the earliest musical setting of a text in the Italian language. Karl Kügle discussed a newly discovered group of polyphonic fragments in the binding of a manuscript in the Landeshauptarchiv of Koblenz, and the extent to which the binder may have deliberately chosen particular leaves from his pile of binding materials on grounds of the appropriateness of their texts. Christian Leitmeir introduced us to the complex and idiosyncratic programme of dismemberment and rebinding undertaken by Amplonius Rating de Berka in forming his library, preserved to this day in Erfurt. David Catalunya reconsidered the position of ars antiquapolyphony in Castile, in the light of several recently discovered fragments, and later demonstrated his considerable talents as a performer on the clavisimbalum as part of the ensemble Tasto Solo, which provided a superb concert in the evocative darkness of Magdalen chapel under the direction of Guillermo Pérez, interspersing keyboard arrangements from the Faenza codex with madrigals and ballate by Jacopo da Bologna, Landini and others.

The symposium The Study of Medieval Music Manuscript Fragments ca. 800–1500, organised by Giovanni Varelli, took place on 19 to 21 March 2018 in Magdalen College. The full programme is available on the ‘events’ page of the Oxford Medieval Studies Programme. The full booklet with abstracts and further links can be downloaded here.

This conference report was written by Nicolas Bell (Nicolas.Bell@trin.cam.ac.uk). 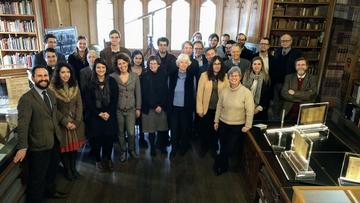