‘Documenting Trauma: Comics and the Politics of Memory’

The day-long symposium, ‘Documenting Trauma: Comics and the Politics of Memory’, hosted at The Oxford Research Centre in the Humanities (TORCH), University of Oxford, on Thursday 22nd June 2017, aimed to explore several key questions: why have so many comics and other graphic narratives, the production and publication of which has exploded in recent years, been framed as memoirs or non-fictional documentaries of traumatic events? Is there a relationship between the comics form, as distinct from film and written narrative through its inclusion of multiple visual panels, and the remembrance and recovery of trauma? How do the interpretive demands made by these disjointed formal attributes impinge on readers of comics and shape their relationship to historical traumatic events?

These ideas were answered creatively the day before the symposium during a comics creation workshop, entitled INKFISH, which was also held at TORCH on 21st June in collaboration with Oxford Writer’s House, an organisation designed to cultivate a literary community in Oxford and offer resources for writers and artists based in the city. Participants engaged in exercises designed to develop their narrative and artistic techniques before drawing their own one page comic that responded to the symposium theme of ‘Documenting Trauma’. The resulting comics were collected together and printed as a small pamphlet, which circulated at the symposium the following day, and copies of which are still available for purchase from TORCH Comics Network Convener, Dominic Davies. This practical engagement with ideas of documentation, and the working through of traumatic experiences in the comics form, was picked up the following day by Nicola Streeten in her artist’s talk, the first keynote of the day, and in which she reflected on the topic of ‘how trauma made me a cartoonist’. Her honest account of the traumatic event that led to her first graphic novel, Billy, Me & You: A Memoir of Grief and Recovery (2012), was both touching and amusing in equal measure, offering deft insights not only into the catharsis of the creative process, but also complicating this simplistic narrative of emotional recuperation—itself a theme that is documented in her ground-breaking comic.

This emphasis on the practical and pragmatic dimensions of comics creation also resonated with one of the symposium’s afternoon panels, ‘Comics in Practice’, where Kerrie Thornhill and Bruce Mutard offered papers about the way in which comics workshops can bring communities together, and how the form allows for nuanced perspectives on the embodied experience of trauma. Similarly, earlier in the day the three papers on a panel entitled ‘Embodied Histories/Historical Bodies’ explored through a more readerly lens how traumatic historical events—from the Holocaust to postwar migration—can be explored through comics ability to visually register their impact through the representation of human bodies. This emphasis on the body also recurred in the panel ‘Visualising Violence’, with Harriet Earle’s eloquent paper ‘Giving a Face to Unspoken Things’ appearing alongside Didar Kul-Mukhammed’s analysis of Alyona Kamyshevskaya’s Russian comic, Moi Seks (2014) and Ana Maeza Ruiz’s account of Una’s Becoming Unbecoming (2015).

Throughout the day, publishers Myriad Editions and the New Internationalist, who have recently joined forces to promote the brilliant graphic novels and comics that the former publishes to the latter’s international audience, had a stall with physical copies of several of these books on sale, including Billy, Me & You and Becoming Unbecoming, as well as a number of other related titles. As well as making these texts available for purchase to delegates unacquainted with the books under discussion,  having them in the room productively foregrounded the physical materiality of the reading experience which is such a crucial component of comics’ circulation and consumption. As though to emphasise this materiality, Laura Findlay, who spoke on one of the day’s opening panels, ‘Tropes of Trauma’, accompanied her critical reading of Art Spigelman’s Breakdowns (2008) with the circulation of a comic of her own. Meanwhile, Katalin Orbán offered a brilliantly theoretical opening paper that charted the rise of discourses around trauma throughout the twentieth century before showing how comics intervened into them, whilst Robert Lang responded directly to the symposium’s Call For Papers through a reading of Ari Folman’s Waltz with Bashir (2008) that showed how traumatic memories can be represented and then mobilised—whether consciously or not—towards contentious political ends.

Whilst ‘Tropes of Trauma’ played out upstairs, the symposium’s other opening panel, ‘Comics and Catastrophe’, spanned some broad geographical terrain and distant historical moments, addressing comics about events as diverse as the Partition of India and Pakistan in 1947, the 9/11 terrorist attack on the World Trade Centre in New York, and the current refugee crisis in Europe. Comics about this last crisis recurred again in one of the day’s closing panels, when Candide Rifkind analysed the ‘counter-visuality’ of the comics form—speaking back to Nina Mickwitz’s earlier discussion of refugee comics and the notion of counter-publics. This panel, ‘Comics Across Borders’, also returned delegates to one of the most popular panels of the day, ‘Graphic Reportage’, where Golnar Nabizadeh, Eszter Szép and Johannes Schmid explored the phenomenon of comics journalism in the work of Emmanuel Guibert and Didier Lefevre, Joe Sacco, and Sarah Glidden. Focusing as much on the aesthetic choices made by these artists as the visual cultures into which they intervene, the panel emphasised the extent to which comics—even in its journalistic and documentary incarnations—rely on as much what is ‘not seen’ as what is in fact depicted. These deeply politicised aesthetic projects were then given particularly material incarnations in a following panel, ‘Memories in Motion’, where the relationship between comics, the city and human rights were foregrounded by Dom Davies and Haya Alfarhan.

The wide-ranging scope and multiple threads of so many of these brilliant talks and panels criss-crossed in myriad ways, always gesturing to one another and cultivating a sense of scholarly community that was equally manifest in the enthusiastic informal conversations during lunch and coffee. To bring these multiple threads and discussions together in one concluding talk might have looked to be an extraordinarily difficult task, but Hillary Chute, in her keynote lecture ‘Disaster Drawn: Comics and Picturing Violence’, was more than up to the challenge. Through a set of marvellously attentive close readings that grappled head on with comics greats—from Spiegelman’s Maus to Sacco’s Palestine—Chute brought the layers of questioning contained within the symposium title together, exploring the ways in which they interacted with and informed one another. From the relationship of graphic drawing to photojournalism through to comics’ ability to excavate and reveal all at once multiple layers of history and memory, Chute brought an astonishingly busy though intellectually fruitful day to a close. The amiability of all attendees, and the extremely enjoyable symposium dinner, confirmed that the symposium functioned as much to make new social connections as it did academic ones. As the organiser, I am extremely grateful to all delegates and speakers who contributed to create an atmosphere of genuine scholarly interest and academic community as we pursued these questions together, collaboratively, as a group.

Symposium participants were privileged enough to return on the morning of Friday 24th June to the previous day’s venue at TORCH to hear a talk, ran in collaboration with TORCH’s ‘Critical Visualisation’ Network, from comics creator and scholar Nick Sousanis, who gave a wonderfully engaging account of the genesis of his ground breaking comic, Unflattening (2015), which he first submitted as his doctoral thesis. He showed how comics can push the boundaries of our perceptual and cognitive understanding of the world, and by concluding with some practical participation from the audience, the three days’ events came full circle to foreground the interrelationship between the pragmatic and critical forms of engagement that comics demand. 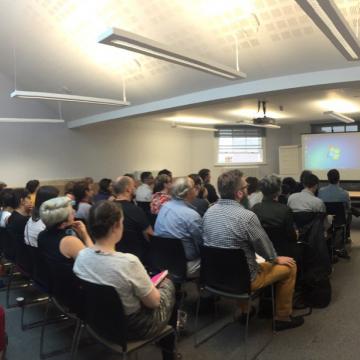