Down the Rabbit Hole: How Can Creativity Solve Wicked Problems?

Down the Rabbit Hole: How Can Creativity Solve Wicked Problems?

It would be impossible to do justice in a short blog to a workshop that ranged from the magical symbolism of Ramon Llull to algorithmic innovation via the countercultures of urban exploration. So let me give a provocation.

What stops us implementing new ideas?

We talked a lot about what stops us being imaginative – we covered everything from the way we categorise our knowledge to the role of imagery in creativity. But we quickly realised that as much of a problem as having really great creative solutions to wicked problems is implementing the solutions we have.

In part, that comes from society’s unwillingness to listen to ideas outside of the normal framework of discussion. We talked a lot about the Overton Window, a concept from politics that explains why debates are always really narrow, because they have to limit themselves to what is an acceptable subject for debate at any time.

Inevitably, this led to a lot of talk of the need, if we are to implement solutions, of speaking from within existing frameworks, pushing at the edges, nudging the Overton window bit by bit until people are ready to hear the idea we really want to have heard. This approach is what the legendary designer Raymond Loewy called the principle of “most advanced yet acceptable.”

But I want to offer the possibility of a different approach. One that seeks to implement ideas that are truly innovative without doing so slowly and incrementally. This seems to me to be essential in a world where the wicked problems we face, from climate change to food security, pandemic threat to human augmentation and AI safety, are both existential and urgent.

It turns out that, as I hinted in the introduction, we need to visit the worlds of urban exploration and religious history.

“we live in our own space, build our own communities, societies, foundation myths and bodies of work.

we share some of your doorways, and sometimes you will see the traces we leave behind. traces like this. often they are strange, unfamiliar, and consequently seem frightening, but they are doorways onto a whole world that exists, fully formed, in parallel with yours.

for too long we have been expected to push at these doors, and gaze around them in wonder and admiration, dreaming, cap in hand, of one day entering the world beyond them. we think maybe it’s time for us to offer an invitation the other way.”

The marks and scratches – the graffiti – we had talked about in our manifesti, were actually not marks and scratches but simply the tiny parts of a fully-formed world that happened to break the mainstream cultural surface, like 2 or 3 dimensions of superstring. Maybe, I thought, just as the answer to culture is not to foster those graffiti within the existing framework but to follow them down the rabbit hole, so the role of creativity in a world of wicked problems is not to be nurtured through intrapreneurship schemes and accelerators or brought into strategic projects, but rather to pull our institutions wholesale through a similar rabbit hole.

What if, that is to say, graffiti and creative oddities are actually the anomalies promising to initiate a Kuhnian paradigm shift.

And that made me think further about what exactly those anomalies are, and I came back to my theological training. The distinction I was trying to draw was one between the stoic idea of prolepsis, of a seed that would grow into something remarkable, and the idea of “first fruits”, of behaviours that would irrupt into the world wholesale from outside it. For creativity to work, it has to be the latter. It has to be about initiating new thoughts, new behaviours, new frameworks; not ones that we then feed and grow and assimilate within the existing system but which burst that system apart.

How we do this – that’s a subject for another day, for whole research strands. But do it we must. Creativity can mean many things. But if it is ever to mean the answer to the wicked problems we face then it has to come in ecosystems that burst, coherent and fully-functioning and offering a respectful middle finger to existing frameworks which it then uses that finger to beckon down a rabbit hole to a better world.

Dan Holloway is a co-convenor of the Futures Thinking Network. His research background is early modern theology, in particular the relationship between taxonomy, Eros, and the creative imagination. He is a two time Creative Thinking World Champion, and CEO of the spinout company Rogue Interrobang (https://rogueinterrobang.com/). 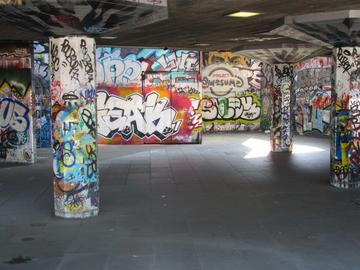