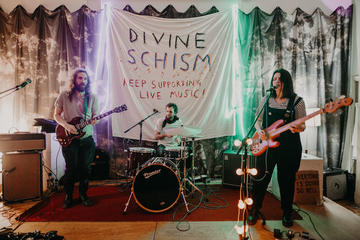 This past weekend, musician Tom Robinson presented a mixtape of his personal selection of tracks on the radio show BBC Introducing. Amongst the amazing songs Robinson selected was the song "Snow", by local band Lucy Leave.

Our very own Dr Jennifer Oliver is actually in the band, and she is also speaking on her new book "Shipwreck in French Renaissance Writing: The Direful Spectacle" at an upcoming Book at Lunchtime session!

In this book, Jennifer Oliver examines a range of literary works with strong intertextual links and focuses on materiality and embodied responses to shipwreck. She traces an increasingly strong theatrical aspect to shipwreck texts. Oliver features well-known texts by writers including Rabelais, Ronsard, and Montaigne alongside the works of less familiar authors and Identifies a mini-genre of books popular in France in the early sixteenth century.

Join us on Wednesday 4 March for the TORCH Book at Lunchtime event on Shipwreck in French Renaissance Writing: The Direful Spectacle by Dr Jennifer Oliver. The event will begin with a free lunch at 12:30pm, with the discussion 1pm-2pm.