First in a series of blogposts by poet-in-residence Sue Zatland, who reflects on different aspects of monumental commemoration, focusing on Berlin’s Memorial to the Murdered Jews of Europe. She shares her poetic responses and experimentations with form.

Memorial to the Murdered Jews of Europe. Architect, Peter Eisenman.

Above ground is an installation of 2,711 massive unmarked concrete blocks, separated by narrow alleys. The maze-like grid is disorienting, a petrified forest in the heart of Berlin. Eisenman: ‘I watched people walk into it for the first time and it is amazing how these heads disappear — like going under water.’ Primo Levi writes of similar experiences at Auschwitz, of prisoners no longer alive, but not dead either. They seemed to descend into a personal hell. Aerial photos show the stones sweeping over undulating ground like an ocean fetch.
I have been lost inside this labyrinth. One thought leads to another: labyrinth, minotaur, Dante/ Everyman/pilgrim; Virgil/guide/poet; violence, innocence, the underworld, harrowing of hell.

I came to myself
at the edge of a wood
poet and pilgrim before me
at my shoulder
the she-wolf stood
in the shade of a linden tree.

An ocean of stone
rose at my feet
on the swell of a distant storm
the siren call
of the city street—
a ligature, a subtle form

of binding. From the shore
the brindled bitch gives tongue.
A  reboant  howl
which, once begun
snarls through alleyways
on a bare-backed wind
harrowing the aisles
until,   undone,   bleeds out
in the deep-mouthed stones.

I came to myself
at the edge of a wood
prophet  and  sinner.
Before me—
chthonic,    misunderstood—
a song of symmetry
driving me     into  the  gorge
where the light unspools
hanging on the air by a thread

and silence breaks
on indifferent walls
as the waters close over my head. 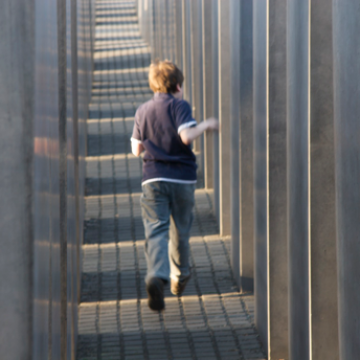