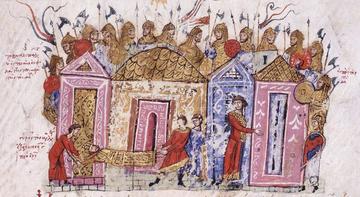 ScandGrads, the graduate organization affiliated with the Department of Scandinavian at the University of California, Berkeley, is proud to announce an interdisciplinary graduate student symposium 'Encounters and Reimaginings: Medieval Scandinavia and the World', March 3-4 2017, Berkeley, California.

From the shores of Vínland to the halls of Byzantium, the Norse traveled widely and encountered many cultures – which in turn influenced Norse society at home. Traces of these journeys can be found in the archaeological record, saga narratives, and modern interpretations thereof. Moreover, continental ideas and literary forms—from romances to saints' lives— informed Scandinavian intellectual and everyday life. The organizing committee welcomes papers exploring encounters and reimaginings across the Old Norse world, as well as echoes and influences of medieval Scandinavia in modern contexts.

Any student or early career researcher is welcome to submit a proposal related to the conference theme in areas of study including but not limited to:
literary studies, material culture, migration, law, politics, religious studies, reception studies, linguistics, and textual studies.

All interested applicants are encouraged to submit an abstract of 200 words to the organizing committee at scandgrads@gmail.com by August 31, 2016.