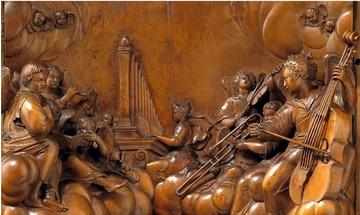 Fairfax House, York, are hosting their fifth symposium in 2017, turning their sights to Crafting an Enlightened World: Patronage & Pioneers. The aim of the symposium is to examine the driving forces behind creating an enlightened world, and in turn how the Enlightenment fed and helped forge the environment in which pioneering craftsmanship in Britain during this period took flight.

This year’s theme connects both with the current exhibition at Fairfax House, Made in York: Inventing and Enlightening the Georgian City, and our recent and exciting acquisition of Grinling Gibbons’ first known, made-in York masterpiece, the King David Panel. Their campaign to save this hugely important artwork by arguably Britain’s greatest-ever carver has been successful, and Fairfax House is now officially its new home.

The 2017 Symposium will be held across two days on Thursday 19th and Friday 20th October 2017. Day 1 will explore concepts of enlightenment including the Age of Enlightenment’s roots and legacy, while Day 2 will focus on craftsmanship and pioneering craftsmen influenced by this extraordinary period with particular (although not excusive) reference to the work of Grinling Gibbons.

A Call for Papers for this conference in now open. Cick here for further details.