‘Finding words that move me to sing’: Jonathan Dove and the sounds of commemoration

As my colleague Prof Kate McLoughlin has written elsewhere on this blog, the composer Jonathan Dove, whose conversation with Dr Kate Kennedy introduced the Aural strand of our series, has written a number of musical pieces associated with commemoration. Dove discussed three of these during the keynote event on 27 April (a talk you can watch on our website): his TV opera When She Died… (2002), reflecting on the death of Princess Diana;For an Unknown Soldier (2014); and In Damascus (2016). Indeed, in his conversation Dove said he was intrigued to see just how many of his pieces were involved with commemoration in one form or another, whether it was the commemoration of an individual or a commission about a national or international conflict.

One such piece is the choral work For an Unknown Soldier, which sets a rich host of poems and texts in nine sections, including verse by Wilfred Owen, Harold Monro, Jessie Pope, Mary Gabrielle Collins, Isaac Rosenberg, Marian Allen and others. Dove has a personal connection to war: his uncle was a rear gunner in the famous ‘Dambusters’ Raid’ in 1943 and was declared missing, presumed dead after the attack. But his choice of texts for such commemorative pieces is also motivated by, he says, ‘finding words that move me to sing’, a powerful idea that reminds us how musical commemoration can draw on the emotions as it seeks to ally the best of words with the best of sounds.

Reflecting on the sequence, Dove explained in the keynote event that he had originally intended to set diary entries or letters home from the Front, perhaps by drawing on the archive of the Portsmouth Grammar School, which commissioned the piece, but in time he realized that he needed texts that were more distilled and, as he said, he found that ‘the poems themselves were letters home’. These were pieces that allowed the listener access to varied experiences of the First World War and, Dove hopes, identify with the speaker portrayed particularly by the tenor. Kate Kennedy observed how this was reminiscent of composer Gerald Finzi’s desire to bring about ‘creative identification’ between audience and the character speaking, to make the audience ‘first person’ as the poems themselves often speak from the position of first person experience.

If Isaac Rosenberg’s poem ‘Dead Man’s Dump’ (the Dies Irae of the piece, according to Dove) is the most famous of the group, it is perhaps Ivor Gurney’s ‘To His Love’ which has the most powerful setting, a poem that Dove said he had been wanting to set for some time. Dove often talks about how the music has to add something to the text, and the Gurney setting which was played as part of the keynote discussion is truly compelling as it both complements and accentuates the desolation voiced by the speaker on the death of a friend on the battlefield.

Appearing at first to be a simple sad lament, the music begins to foreshadow something more distressing as we hear ‘You would not know him now...’, and when we listen to the final four lines (beginning ‘Cover him, cover him soon!’), the raised volume and pitch communicate the sheer horror of a mutilated body that is no more now than ‘a red wet/Thing’. Supported by a chorus repeating the line ‘Cover him’, but soaring above it, we are led to hear in the tenor a voice that speaks not only for this man but for all those known and unknown bodies left on the field. This marriage of music and text reflects the conflicting desires to commemorate a man killed but also the impossibility of remembering them as they were, when all that remains is a bloody corpse.

Also poignant are the opening and closing moments of the piece which feature children’s voices singing lines from the sea shanty ‘Tom’s Gone to Hilo’. In his conversation with Kate Kennedy, Dove observed that he had been trying to consider how children respond to war. Given that the commission came from a school where over one hundred former students were killed in action during the First World War, this question resonated to him (and to his audience at our event) to an even greater degree. 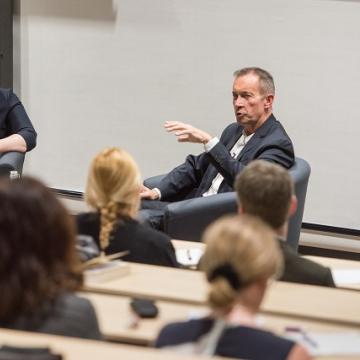