Emma Day is a DPhil candidate in American History at the University of Oxford. Emma is writing a feminist history of the AIDS epidemic, and in this blog post, she discusses the AIDS activism of the San Francisco branch of the direct-action group, the Lesbian Avengers.

On 26th September, 1992, three young, white supremacist men threw a Molotov cocktail into the basement apartment of Hattie Mae Cohens, a 29-year old black lesbian, and her 45-year old white gay friend, Brian H. Mock in Salem, Oregon, killing them both. On 3rd November, Oregon citizens turned out to vote on Ballot Measure 9, a referendum proposed by the conservative group, Oregon Citizens Alliance (OCA), on whether the state constitution should be amended to classify homosexuality as ‘abnormal, wrong, unnatural and perverse’ and in need of being ‘discouraged and avoided.’[i] While the proposal failed, debates surrounding the referendum provided the context to an arson attack driven by racial and homophobic hate.[ii]

Arson has played a prominent role in the history of violence against the gay and lesbian community and their ability to cultivate safe gay spaces. During Pride Sunday on 24th June, 1973, an arsonist set fire to the New Orleans gay bar, UpStairs Lounge, killing thirty-two people in less than twenty minutes. The fire was the largest assault on the gay community before the June 2016 attack on Pulse nightclub in Orlando.[iii]

The bombing of the Atlanta lesbian nightclub, Otherside Lounge in February 1997, the bombing of the Admiral Duncan pub in Soho, London, in April 1999, and the arson attack on the Backstreet Café in Roanoke, Virginia, in September 2000 are just a handful of other examples.[iv]

In the Autumn of 1992, the Avengers put their newly honed fire-eating skills to practice during a series of memorials they organised for Hattie May Cohens and Brian Mock in New York. As some Avengers ate fire, others chanted, ‘The fire will not consume us. We will take it and make it our own.’[v][vi] In April 1993, the group organised the first Dyke March in Washington D.C., where, without a permit, the caped Avengers marched with 20,000 people before eating fire outside of the White House. The women’s appropriation of fire turned what had historically been a symbol of tragedy and hate into a public display of dangerous queer affirmation.

The founding of the Lesbian Avengers spoke to broader tensions in the sexual and political landscape of 1990s America. Since its beginning, the AIDS epidemic provided a platform for the political right to campaign for policies in an attempt to regulate sexuality, and the emergence of the Lesbian Avengers coincided with the steady increase in the number of HIV cases among women.

Lesbian activists worked to challenge the disconnect between identity and behaviour that reinforced the misconception that lesbians did not engage in behaviours that put them at risk for HIV, such as having multiple sexual partners, having sex with men, using drugs, or becoming pregnant.[vii] In 1990, Charles Schable, who conducted HIV transmission studies for the Centres for Disease Control (CDC) publically stated that ‘it isn’t necessary to include risks for gay women’ because ‘lesbians don’t have much sex.’ The CDC did not require the gathering of sexual orientation data from women with AIDS and no studies examined the possibility of woman-to-woman HIV transmission.[viii]

In October 1993, the San Francisco Department of Public Health released a ‘Women’s Survey’ reporting that lesbian and bisexual women had an HIV/AIDS infection rate three times higher than that of the general population of women.[ix] In response, the San Francisco Lesbian Avengers launched a campaign challenging the federal government for its failure to address issues surrounding lesbians and AIDS. On 13th August 1994, twenty-two Avengers demonstrated outside the CDC’s Bay Area office, and for the following weeks, months, and indeed years, the women sent faxes to the CDC’s headquarters and phone zapped its AIDS information hotline, demanding that the agency carried out studies on the possibility of woman-to-woman transmission, and revised its limited definition of ‘lesbian’ as ‘a woman who hasn’t slept with a man since 1978.’[x]

In addition to the Department of Public Health’s ‘Women’s Survey,’ the death of twenty-six-year-old Joan Baker became a rallying point around which the Lesbian Avengers mobilised. On 23rd October 1994, the Avengers organised a political funeral Joan which saw hundreds of activists from the Lesbian Avengers, ACT UP San Francisco, ACT UP Golden Gate, and the Lyon-Martin Women’s Health Services march from Dolores park into the Castro.[xi] While by the mid-1990s, political funerals had become a prominent feature of AIDS activism, with the political funeral of Joan Baker, lesbian activists extended this powerful act of public mourning to women, who marched with banners explaining that they were also ‘fighting for our lives.’

From the mid-1990s, as the group began gaining mainstream attention, they admitted that ‘with every breakthrough comes a backlash.’ Before the first Dyke March in Washington D.C. in April 1993, Dee DeBerry, an out lesbian with HIV was threatened with the fire-bombing of her house if she joined the Avengers in Washington. When she returned home to Tampa, Florida, she found that her house had indeed been torched and destroyed.[xii]

While visibility often assisted vulnerability, the Avenger’s radical, fun, and pro-sex agenda inspired as many as fifty-five locally run chapters to emerge around the country during the 1990s, each with a shared commitment to advancing lesbian survival in the face of a society that made invisible their fight against a disease that was killing them.

And while some commentators during this period argued that lesbians were tired of addressing issues, notably AIDS and abortion, that were ostensibly ‘unlikely to affect them directly,’ the San Francisco Lesbian Avengers worked in coalition with other organisations and tied their struggles to those of all women and other marginalised groups seeking equality in the modern United States.[xiii]

Andrew Hartman, A War for the Soul of America: A History of the Culture Wars (Chicago: The University of Chicago Press, 2015)

[xiii] Eloise Salholz, ‘The Power and the Pride,’ Newsweek, June 20, 1993. In January 1989, WCRC founder Jackie Winnow gave a speech to a conferenced titled, ‘Lesbian Caregivers and the AIDS Epidemic,’ in which she drew comparisons between the AIDS and Breast Cancer epidemics: ‘If you have AIDS, you can go to the AIDS Foundation for food and social service advocacy, and you can get emergency funding through the AIDS Emergency Fund and get excellent meals through Project Open Hand…If you have cancer….no organization fights for your needs, no one advocates for you.’ Bruce Mirken, ‘The Politics of Breast Cancer: Is the Gay Community Ignoring its Other Deadly Plague?’ S.F. Frontiers, January 5th, 1995, 12-13. Lesbian Avengers San Francisco Chapter records. GLBT Historical Society. box 1. 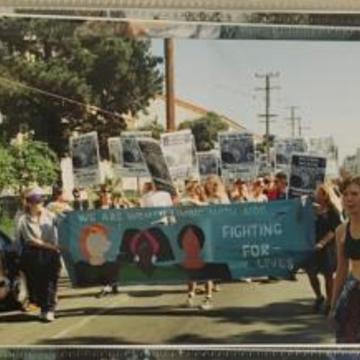