Tony Horwitz, whose work as a journalist in the 1990s earned him the Pulitzer Prize, has also been an acclaimed war correspondent covering conflicts in Africa, the Middle East, and the Balkans. However, it was regarding his work about a much older war that he spoke as a panellist at our recent workshop on Monumental Commemoration. His book Confederates in the Attic is twenty years old this year, but interest in the American Civil War that it explores has certainly not abated. On the contrary, recent violent disputes over the meaning and status of the Confederate flag, Confederate monuments, and the rallying of white supremacist groups around the statue of Robert E. Lee in Charlottesville, Virginia, suggest that when Horwitz subtitled his book ‘Dispatches from the Unfinished Civil War’, he wasn’t joking. As his reports prove, that conflict is particularly unfinished if you live in the South.

The extraordinary journey that Horwitz undertakes – from North Carolina to Alabama by way of six other Southern states – includes bizarre, moving, macabre encounters: with Civil War fanatics on pre-dawn battlefields, with the woman who owns the remaining parts of the film set of Gone with the Wind, with Stonewall Jackson’s buried arm, with the only living Confederate widow, and with the ‘hero’ of Ken Burns’ acclaimed TV documentary series about the war, Shelby Foote. Yet some of the most memorable sections of the book feature a form of commemoration that we haven’t yet encountered in our Post-War series: battle re-enactment, or, as the hardcore re-enactors would prefer it to be called, living historians at work. Although Horwitz’s book is shot through with a good dose of humour – sometimes hilarity – his writing about the re-enactors is notable for the serious way in which he treats them.

At one point on his journey, Horwitz joins a group of latter day Confederates as they replay one of the most significant moments in the Civil War: the defeat of the South at the Battle of Gettysburg, Pennsylvania in 1863. Horwitz and the others act out a Confederate charge on the site of the battlefield – now a national park – surrounded by tourists who either seem to be bewildered (‘Are you guys reactors?’), or keen to cheer them on. Reflecting on the experience, Horwitz surmises that the tourists had been underwhelmed by the park – until the re-enactors arrived. ‘By charging across the landscape in our rebel uniforms,’ Horwitz observes, ‘we’d given a flesh-and-blood boost to their imagination, a way into the battle that the modern landscape didn’t easily provide.’ This congregation of tourists, and the deep need to connect with and preserve the ‘hallowed ground’ of such battlefields, speaks not only to those who want to trace the exploits of their ancestors, but to a desire to carry out personal commemorative actions in the very spaces where soldiers fell. This might simply mean visiting one of the 1200 monuments in the park, or it might mean watching a battle re-enactment to experience what Horwitz identifies as ‘a period rush’. However they choose to remember, there is a real sense amongst many visitors that an encounter with battle-scarred land will somehow make time fall away and bring the past into clearer focus.

When Horwitz visits the battlefields of Shiloh in Tennessee, a park ranger describes how conflict can leave ‘ghost marks’ – earthworks or remnants of trenches dug by the Confederates – which are usually only visible from the air. Like the re-enactment, walking over the ground where such marks are present could be a distinctly visceral form of commemoration; participatory, vital. It can occasion new ways of understanding what is being commemorated and suggests something profound: that the land itself has things to tell us if we just listen and look hard enough.

You can listen to all the panellists’ presentations from the Monumental 1 workshop on our podcast series. 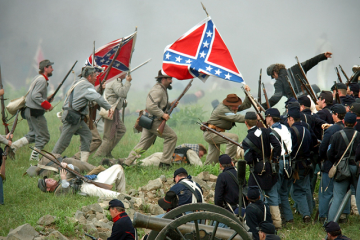