‘Global’ and ‘middle ages’ are not an obvious fit.  How can we refer to ‘global history’ in an era when the Americas remained largely unknown to the rest of the world, and in which contact between Eurasia and sub-Saharan Africa was relatively fitful?  Since 2012, however, the AHRC-funded project ‘Defining the Global Middle Ages’, involving thirty academics from institutions across the UK, has sought to outline what a global history of the period between 500 and 1600 might look like, and, in doing so, to question definitions of a ‘global’ approach to history designed with the early modern and modern periods in mind.  This May, two talks have provided medievalists at Oxford with the opportunity to learn about the fruits of this collaborative research network and to contemplate the consequences that a ‘global approach’ might have for the discipline of medieval history as a whole.

Professor Naomi Standen of the University of Birmingham, one of the members of the ‘Defining the Global Middle Ages’ project, was in Oxford on 3 May to give the History Faculty’s Annual Special Lecture, taking as her topic ‘Options and Experiments: Defining the “Global Middle Ages”’.  Ranging from China to the Swahili coast to the Mayan empire, Professor Standen argued that the Middle Ages was a period of global networks and intense cross-cultural interaction, but that historians often fail to recognise this because in the medieval era, unlike in those which preceded and succeeded it, centralised states were not the primary agents of connectivity.  The period between the fall of the Roman empire and the rise of the early modern nation-state, Standen said, was characterised by political fragmentation and religious diversity, meaning that people across the globe were exposed to a wide variety of different cultural traditions and, mostly unconstrained by coercive institutionalised governments, were able to pick-and-choose from amongst these paradigms to best suit their own particular needs.  The result was a ‘globalisation’ defined by multiculturalism and experimentation, rather than the imposition of a standardised dominant culture.  In Standen’s view, a global history of the middle ages proves that globalisation need not be the product of conquest, expansion, and integration, but can also stem from choices made by individuals at all levels of society.

Professor Standen’s talk was followed on 17 May by ‘The Global Middle Ages: A Discussion’ at St John’s College, in which Dr Caroline Goodson (Birkbeck, University of London), Dr Catherine Holmes (Univ, Oxford), and Professor Chris Wickham (All Souls, Oxford)—the latter two being members of the ‘Defining the Global Middle Ages’ project—each gave short papers.  While Professor Standen focused on placing the Middle Ages within long-term narratives of global history, the speakers at the St John’s event were more concerned with outlining the opportunities and pitfalls that global history presents to medieval historians working on shorter time spans or on a particular region.  Dr Goodson, examining archaeological and textual evidence from the central Mediterranean region in the early Middle Ages, found that while there was some inter-cultural contact in this region, economic activity was steadfastly local and cultural assimilation between Romans, Byzantines, and (Islamic) North Africans, minimal.  While Goodson argued that a global history approach based on connectivity, such as that proposed by Standen, was of limited relevance to the society she studied, she did think that a global study of the Mediterranean could be useful in demonstrating how the different cultures active in this region responded in similar ways to common pressures and stimuli, producing ‘inter-related chronologies’ for all societies in the area.  Dr Holmes, like Goodson, addressed the relevance of global history to a regional case study, this time examining the Byzantine Empire from the thirteenth to fifteenth centuries.  Holmes argued that a global approach could encourage historians to think of the Byzantine Empire not as a centralised polity, but as a as polycentric entity that needed to negotiate with local agents from a wide variety of cultural traditions in order to maintain power.  This set-up contributed to a hybrid political culture in the region, with rulers of all kinds of polities borrowing liberally from the repertoires of Catholic, Orthodox, and Islamic communities to justify their power.  Holmes’s presentation emphasised that a global history of the middle ages should be concerned as much with a ‘micro-history’, redefining the relationship of local space to larger polities, as with a ‘macro’ narrative, comparing the development of cultures and empires.  Professor Wickham took a broader view of what global history could mean to medievalists.  He stated that there are three main types of global history—one tracing the ‘common development’ of all world cultures towards modernity, one identifying (and usually celebrating) the networks formed between different cultures, and one comparing the histories of unconnected polities or regions from different parts of the globe.  Each type of global history, Wickham argued, contains dangerous tendencies for the unwary practitioner: a ‘common development’ approach often becomes a narrative of the triumph of Western civilization and also fails to account for why certain areas do not follow wider global trends, a connective approach ignores the fact that most people do not move from their localities or have direct contact with other cultures, and a comparative approach is overly reliant on secondary literature.  Wickham ended by stressing that not all medieval historians need become global historians, but that a global approach can provide new points of comparison or new potential explanations for phenomena in particular historical societies, prompting historians to question perceived orthodoxies in the history of their region of specialization.  Professor Nicholas Purcell (Brasenose, Oxford) brought the event to a close with a series of concluding remarks, which stressed that a global history of the middle ages should be one that seeks to explain why globalisation doesn’t happen as much as why it does, and echoed points made by Goodson and Holmes in emphasising the importance of conducting global history at a local level and rooting it in the actions of individuals.

So, what can medieval historians make of all this?  The talks by Standen, Goodson, Holmes, and Wickham certainly presented a global history as a tempting prospect—particularly as a means of elucidating the relationship of local political and economic processes to a wider global milieu.  All of the talks emphasised local contexts and individual agency as the keys to a medieval global history, challenging ancient and early modern narratives of globalisation as a product of conquest and empire.  But have we been too quick to write coercion out of the ‘Global Middle Ages’?  The papers discussed above implied that individuals and groups could choose whether or not they wished to engage with the outside world through economic and cultural exchanges, and that power structures were formed in response to local needs and on-the-ground negotiations between ruler and ruled.  We must remember, however, that even though the middle ages was not characterised by imperial hegemony or consolidated nation-states, political domination and socio-economic oppression still very much constrained the options available to individuals, either denying them access to networks in which they would have liked to participate or forcing them into contact with other cultures against their will.  Robert Bartlett’s book The Making of Europe: Conquest, Colonization and Cultural Change, 950-1350 (1993) is perhaps an important corrective to the emerging view of the ‘Global Middle Ages’ as a period of diversity and individual agency.  The world that Bartlett presents is also one of political fragmentation, but non-state actors (aristocrats, merchants, and the Church, in particular) use force to conquer peripheral lands and enforce cultural standardisation—Ireland’s inclusion into an Anglo-Norman world of trading contacts and cultural practices, for example, was hardly a matter of choice for most residents of the island.  While the attention of historians involved in the ‘Defining the Global Middle Ages’ project to local contexts and non-state agency is laudable, it is also imperative that today’s historians of the ‘Global Middle Ages’ do not reinstitute the nineteenth-century Romantic’s view of the Middle Ages as a period of personal freedom before the onset of bureaucratised modernity.

Another point of contention, raised at both events by Dr Hannah Skoda (St John’s, Oxford), is the fact that the study of medieval global history has been undertaken almost entirely by scholars from Western academic institutions, particularly Anglo-American ones.  Does this result in an essentially European vision of the histories of Africa, Asia, the Middle East, and the pre-Columbian Americas, and devalue the research performed by scholars from these regions?  It’s certainly an area of concern, but scholars from the ‘Defining the Global Middle Ages’ project did indicate that they hope in future to collaborate with academics from outside Europe and North America.

For those wanting to know what, exactly, constitutes ‘global history’, the ‘Global Middle Ages’ events hosted by the History Faculty and St John’s did not provide easy answers.  ‘Global history’, after all, doesn’t have its own methodology or a clear range of topics associated with it.  This ambiguity, however, may be a benefit rather than a problem.  The goal is not to construct a meta-narrative of globalisation, but rather to prompt historians to approach their own work from new angles and to ask new questions of their material in light of developments occurring elsewhere in the medieval world.  In short, it’s not creating a definition for ‘global history’ that’s important, but rather the process of inquiry that it generates.

Dr Eliza Hartrich is a Fellow by Examination at Magdalen College, University of Oxford 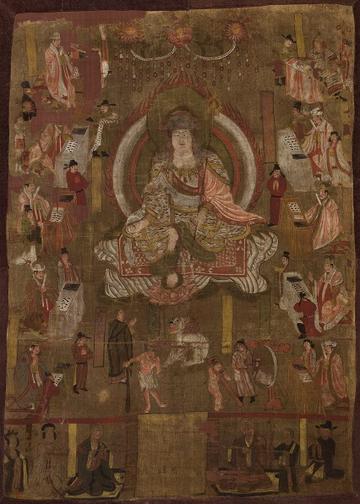