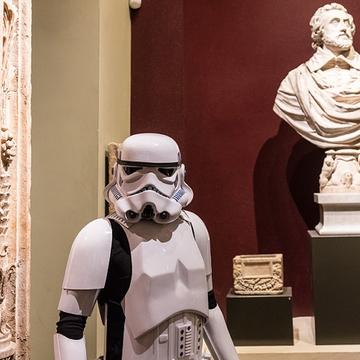 Are you a superhero or a supervillain? The Ashmolean Museum opened its doors for a night of action-packed adventure on 29 January 2016, exploring heroes and villains across cultures and through time.

TORCH collaborated with the Ashmolean on a series of bite-size talks exploring the theme of heroes and villains in Ashmolean collections. TORCH academics spoke on a range of topics, and some of the videos are now available to watch again at the links below.

- ​Heroes and Villains in Indian Paintings
Nisha Somasundaram introduces the great male and female heroes in Indian epics and the demons they defeated using a mix of scholarly insights, mythical storytelling and exploration of symbolism through performance, movement and gestures.

​- ​The Alfred Jewel and Kingship
Amy Faulkner explores how Alfred’s translations question what it means to be a good king, and how the use or misuse of wealth is at the heart of this question.

​- ​Live and Let Die - in Greek Epic
Dr Almut Fries examines the Attic black-figured wine jug that illustrates a crucial scene from The Illiad, a tale in which heroism and villainy merge. She explains the iconography of the vase painting (including the symbolism of the animal skins Dolon and Diomedes are wearing) and locate it in Greek mythical history – Homer and beyond.

​- ​Great Men and Fallen Heroes
Dr Jessica Goodman explores how the meaning of ‘hero’ shifted in France in the late eighteenth-century and its influence on the creation of the Panthéon, which was a huge secular temple to house the bodies of these 'great men'.