Report from the Co-ordinator and tutor for UNIQ’s ‘History: Race and Protest’ summer school

On the 10th July 2017, thirty enthusiastic students from England, Scotland, Northern Ireland and Wales came together for UNIQ’s ‘History: Race and Protest’ summer school. The aim of the week was primarily to encourage students to think about new and different ways of doing History, alongside giving them a taste of undergraduate life.

The team (myself, Evan Matsuyama and Isabelle Waterfall) were lucky to host speakers throughout the week who lectured the students on a variety of issues. On Monday, Professor Stephen Tuck opened the week with an informative overview of ‘Race and Protest within the Global Civil Rights Movement’ before a talk by Dr Jed Fazakarley introducing the students to protest in modern Britain. This was followed by discussion groups in which students discussed some of the key questions arising from the morning’s sessions as well as broader ideas arising when thinking about the Civil Rights movement as a global phenomenon. These included questions surrounding how the Civil Rights movement is defined and taught in Britain as a rather US-centric phenomenon and how history differs depending upon the scale and scope through which it is studied. By adjusting their view of Civil Rights movements from a local to national or international scale, we observed the changing narratives which emerge.  Much like a mosaic with thousands of pieces, with history we see something different depending on how close we are standing to the pieces being assessed.

The following day, a lively and well-received lecture was held by Dr Siân Pooley who thoroughly engaged the students with an interactive session introducing them to the more specific details of the British movement whilst proposing new ways of thinking about types of protest, agency and strategy versus tactics - from reactive politics to everyday acts of resistance. Just as the day before, this seminar sparked thought-provoking discussions from the students on the changing form of resistance within past and contemporary protest movements in our breakout session before lunch.

After lunch, DPhil student, Evan Matsuyama, gave the day’s second lecture entitled ‘Americans from the South and East: A brief history of Asians, Pacific Islanders and Latin Americans in the United States’. Evan’s session presented an alternative and often overlooked perspective of the making of the 20th century American movement for civil rights by introducing the narrative of Japanese Americans in U.S. concentration camps during the Second World War.  Alongside our earlier talks of the week, the day’s sessions inspired students to consider a more global, alternative perspective of the Civil Rights Movements rather than simply the nationalistic perspective of one single country’s movement when reading for their essays to be submitted at the end of the week.

On Wednesday morning, Pembroke College opened its doors, and following a welcome from Dame Lynne Brindley, Master of Pembroke, students had a Q and A session on admissions in higher education. In the afternoon, students moved to the Oxford Union Debating Chamber where they attended a talk by Stephen Tuck on Malcolm X's visit to that same room, 53 years previously. Malcolm X had spoken in support of the motion, “Extremism in the defence of liberty is no vice”. Recounting this moment, Stephen’s talk provided the audience with an understanding of the transatlantic nature of the civil rights movement, intertwining the life story of the black revolutionary with the struggle for racial equality in places such as Oxford.

Thursday saw our last speaker of the week, Dr Patricia Daley, Professor of Human Geography of Africa and a recently serving assessor for the university’s ‘Equality Report’, deliver an enlightening talk on equality in higher education and her own journey into and within academia. This inspiring talk was followed by a film screening of The Black Power Mixtape (2011).

During the week’s afternoons, students were hosted by the Philosophy and Theology Library and other university libraries using their study time to select and read primary and secondary sources around the topic of their essay. I gave various sessions throughout the week alongside the students’ studying for their essays– from advice on note-taking and using sources to advice on essay-writing. These essays acted as the culmination of the week’s events and themes, with students answering a question surrounding the value of a global perspective when studying the Civil Rights Movements. On Friday morning, we held Oxford-style tutorials with the students, discussing their answers to the question and providing them with both written and verbal feedback to their essays and reflecting on the week in general.

Having attended the UNIQ course myself many years ago, I know how valuable the experience can be and have been delighted and privileged to plan and deliver this week and very grateful to Stephen, Evan, Isabelle, the UNIQ team and all of the academics who kindly gave up their time to speak to the students. I would also like to take the opportunity to thank TORCH and the Philosophy and Theology Faculty for hosting us throughout the week. 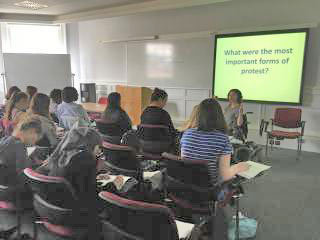