On 27th April 2016, in addition to lecturing to a capacity crowd in the ‘Race and the Curriculum’ series, Professor Homi K. Bhabha led a small seminar entitled ‘Between the World and Me’. Bhabha is author of seminal postcolonial texts such as The Location of Culture (1991) and is currently the Anne F. Rothenberg Professor at Harvard. Advance reading for this seminar included, unsurprisingly, Ta-Nehisi Coates’ Between the World and Me, Bhabha’s own ‘Framing Fanon’, and a chapter from Emily Apter’s Against World Literature: The Politics of Untranslatability.

Most of the discussion, however, centred on Coates’ 2015 memoir/polemic, written (in homage to James Baldwin’s The Fire Next Time) in the form of a letter to his son. Bhabha began by turning our attention to two symptomatic passages of a book that Toni Morrison has described as ‘required reading’: one in which Coates’ son is ‘pushed’ and told to “Come on!” by a white woman ‘on the Upper West Side’ (92-93); and another in which Coates reflects on ‘the inescapable robbery of time’ suffered by ‘the black race’ (91).

For Bhabha, these offer ‘figural, graphic moments’ rather than narratives of blackness – in Walter Benjamin’s words, who was cited throughout the seminar, this is ‘dialectics at a standstill’. Instead of recounting a history of African-American discrimination, and explaining its causes, these ephemeral moments (combining to form a ‘montage’) articulate the ‘phenomenological’ or ‘non-empirical’ experience of racism, its particularities of class, gender, and location. As Coates comments in the first of these passages: ‘I turned and spoke to this woman, and my words were hot with all of the moment and all of my history’ (94).

Bhabha focused in particular on Coates’ use of the word ‘insecurity’ here (‘there was my own insecurity in my ability to protect your black body’), asking us to reconsider security outside of its usual associations with surveillance and the state. Gesturing towards without fully outlining his current research project, he proposed that security and its discontents are an abiding preoccupation of contemporary art.

Indeed, in response to a question about the current theoretical vogue for the term ‘precariat’, Bhabha explained that he prefers the ambiguity of (in)security as it demonstrates (with its equivocal parentheses) how security and insecurity are always folded into one another, two sides of the same coin.

Ed Dodson is a DPhil Candidate in English. His thesis is entitled ‘The Occluded Persistence of Empire in Contemporary British Fiction, 1979-present’. 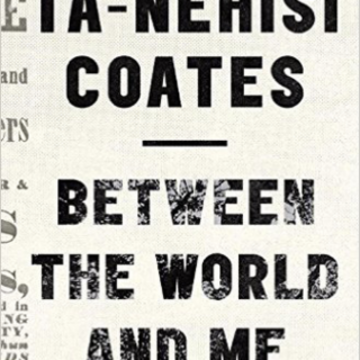