"Hutton's Unconformity" - WINNER of the 11 - 17 Category, the TORCH Humanities and Science Competition 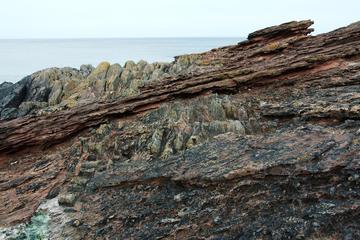 James Hutton (known as the ‘founder of modern geology’) lived and worked in Scotland during the enlightenment of the late 1700s. During his time he did much work for the newly emerging scientific field of geology including his work on the age of our planet which he proved using evidence from Siccar Point, near Edinburgh - now known amongst the geological community as Hutton’s Unconformity. It could be argued that his work changed humanity by discovering a really cool rock formation to inspire budding geoscientists for generations to come but the main reason this breakthrough impacted humanity was what it proved. That the world was much, much older than the Bible said it was.

At the time, it was believed that the earth had existed since the creation of the Garden of Eden (from the Christian Bible). A date had even been set: the 23rd October, 4004 BC, making the planet roughly 6,000 years old. The layers observed in the rock strata were accredited to a biblical flood rather than the layering of sediment over thousands of years (@jimmor12, 2020). Hutton, however, used his new theory of uniformitarianism (that using knowledge of modern era processes of deposition and erosion, etc. you can figure out how long it took for certain formations to occur) to suggest that the rocks at Siccar Point show that the Earth has been around for a much, much longer time scale and there was no reason to predict its end. (Famous Scientists, 2016) As Hutton put it himself in his book, Theory of the Earth, “The result, therefore, of this physical enquiry, is that we find no vestige of a beginning, no prospect of an end’ (1788). Hutton presented his evidence to the Royal Society of Edinburgh in 1785 where he outlined his idea of the rock cycle, a process that could only take place over thousands of years. (Famous Scientists, 2016) The proof of his ideas was found at Siccar Point where one can find the junction between two different types of rocks, created by two entirely different forces during two entirely separate eras. Here, the vertical, grey metamorphic rock juxtaposes the horizontal, red sandstone on top of it. The only explanation for this is that the metamorphic rock was laid down then transformed through heat and pressure causing it to fold, all before the sedimentary rock began to be deposited. (@jimmor12, 2020) We have now been able to date the rocks to show that the metamorphic rock formed some 435 million years ago, whilst the sedimentary rocks formed around 65 million years later when conditions in Scotland were entirely different (namely that it was no longer under the sea and was located just south of the equator) (Cox, 2018). Looking at the known rate of deposition, sedimentation, and other geological processes, it had to be concluded that this had been formed over a very long period of time, much longer than 6,000 years, and therefore that the Earth had been a planet for much longer than the Bible appeared to indicate.

So why is this so important? It is said that Hutton’s ideas were the first to free science from religious orthodoxy and remove scientists from the limitations set by the need to follow the church. A feat that was integral in the future growth of the scientific community and also a feat that was paralleled by many ideas during the enlightenment. Hutton himself did believe in the idea that God created the earth, he simply disagreed with the literal interpretation of the Bible. Nevertheless, his ideas were unsurprisingly not widely accepted. However, over time, the Christian church has released its grip on scientific research: Hutton’s discovery symbolised the beginning of this. This has had a major impact on the modern world and modern scientific processes which are now based upon evidence and not the interpretation of any religious text.

Another reason that this particular discovery had such an impact on humanity was perhaps not what it said itself (as not everyone views rocks with such importance as the geologists) but what ideas it lay the foundation for. Although Hutton’s ideas were not widely accepted until their publishing by Hutton’s friend John Playfair in 1802, they were relatively quick to influence culture and even be accepted by the Church of England. (Cox, 2018) Charles Darwin’s theory of evolution is widely regarded as one of history’s most important scientific discoveries, again laying the foundation for much of what is known about modern biology. Darwin, however, would not be the household name he is today were it not for Hutton. Darwin read Hutton’s book Theory of the Earth (1788) which provided him with the geological timescale needed to conceptualise his theory of natural selection leading to evolution. If Darwin had not read Hutton’s work and not gone on to theorise evolution, we may not have had all the discoveries about genetics and DNA that have led to so much vital work in medicine. Another Charles, this one less famous and with the surname Lyell, also took interest in Hutton’s ideas and used them in his three-part book Principles of Geology (1830) where he further popularised uniformitarianism and used the framework of deep time proposed by Hutton in order to suggest new ideas. (James Hutton: The Founder of Modern Geology | AMNH, 2020) Something which geologists and other scientists have been doing ever since.

This idea of a much older earth, however, did not only impact the sciences but had a great impact on the humanities as well. You would imagine a discovery about the past, especially such a distant past, is hard to impact any current society but Hutton managed to do just that. The idea of deep geological time is one that has a big impact on modern-day society. If we did not deem the world to be older than 6,000 years we would not be able to understand or deal with economic and environmental problems such as future climate change, the unrenewable nature of fossil fuels (and the need to find cleaner energy sources), or the rapid loss of biodiversity. Without the perspective of geological time, they would all seem rather inconsequential and we would not be able to view humanity as just a small part in a much larger picture as we are able to today. (Cervato and Frodeman, 2012) Furthermore, Hutton’s idea opposed the accepted fact that the world was going to end sometime soon, this would cause humanity to even further disregard the planet as well as altering everyone’s views of the earth and human life. The answer to many problems, both scientific and social, lie in our past, over a timescale that we only know about thanks to Hutton and his Unconformity.

Overall, Hutton’s Unconformity is a discovery that changed humanity indirectly. This idea of opposing religious ideas and the proposition of the vast scale of geological time have allowed for a chain reaction of thousands of scientific ideas and discoveries to be made that have led modern society into the knowledge and technology that it possesses today. His ideas created at a rock in Scotland have impacted lives and culture for hundreds of years since, and that is what makes it a breakthrough that changed the world.

@jimmor12, F., 2020. The Blasphemous Geologist Who Rocked Our Understanding Of Earth's Age. [online] Smithsonian Magazine. Available at: [Accessed 10 May 2020].

James Hutton (1788*). Theory of the earth; or an investigation of the laws observable in the composition, dissolution and restoration of land upon the globe. (From. the Trans., Roy. soc. of Edinb.).”, p.96.