In Conversation with Roland Betancourt

On December 3, the New Critical Approaches to the Byzantine World Network at TORCH hosted a roundtable discussion with Professor Roland Betancourt (UC Irvine), author of the recently-published book, ‘Byzantine Intersectionality: Sexuality, Gender, and Race in the Middle Ages’ (Princeton University Press, 2020). Our discussion touched on the role of politically-engaged and accessible scholarship in Byzantine Studies, and on intersectionality as a heuristic for bringing to light less well-known medieval social identities. We discussed how these social identities are mediated by medieval texts and images, and bounded by the treatment of information due to literary genre or iconographic norms. However, as Professor Betancourt points out, normative readings can further obscure medieval social identities. So through scholars adopting different critical positions, and by associating sources that are rarely consulted in conjunction, new questions become salient.

Our conversation alighted on the framing of ‘Byzantine Intersectionality’ as an example of engaged, ethical scholarship that questions ways of thinking and ways of knowing. Beyond engagement with existing discussions and research happening in the field of Byzantine Studies, ‘Byzantine Intersectionality’ is a book meant to stimulate new conversations. An eminently readable book, the use of modern language and terminology allows the reader to access medieval social identities via a vocabulary rendering them less remote. Although this book will be of great interests to Byzantinists and other medievalists, it also lends itself to a broader political project. It is a work that resists complicity with received ideas and discourses that only reproduce forms of bias — heuristic prejudices are often viewed as ‘common sense’ or neutral. ‘Byzantine Intersectionality’ does not feign neutrality: rather it boldly strives to build community, and lends itself to existing community-building projects.

The accessible and modern terminology employed both reflects the book’s ethical standpoints, but also functions provocatively. This book questions the way in which we think about Byzantine history, how we approach Byzantine texts and images, and the parameters we use in thinking about these objects of study. Perhaps most jarring for the medievalist is the rigour of a modern and engaged approach—for example, adopting GLAAD’s outlines about trans representation in the media, or the contingent use of pronouns within the text itself—and has aroused the most pushback. This framing functions as a new epistemology that rebukes denialism. Such a rooted position forces us to think beyond the highly mediated representation of medieval social identities, such as trans identities, in text and iconography. This rootedness allows for lives to exist, as we expect these lives to exist, and to have existed. The rigour of the approach is mirrored by the content of the study, which presents a variety of sources, including Byzantine medical texts, that move beyond the specificity of one manuscript and one group of MSS. The impressive source corpus for this study can be appreciated in spite of one’s ideological position.

‘Byzantine Intersectionality’ resists the cataloguing of information about Byzantine social identities as phenomena, and historicizes the intersection of race, gender, and sexuality. Although the terminology employed is novel, a result of advances in critical theory, the objects of study are very much embedded in the pre-modern period and the shifting dynamics of the Byzantine cultural sphere. For example, we discussed the process of racialization in Byzantine texts and iconography where instances of racialized shaming function less as formal categorization for the purposes of racialized exploitation, and more as a prejudiced logic (e.g. for gendering a subject).

Betancourt surmises that colourism is very often used to invoke and mark gender difference in Byzantine texts and art, rather than marking out discrete groups of people. However, as Betancourt notes, there are also repeated instances where skin colour is invoked to inform certain practices. Here, the deployment of a discriminatory logic and shaping of information based on skin colour, implies that skin colour informed ideas about a shared character and personality. For example, the Menologion of Basil II offers several depictions of people from pre-Islamic Arabia: where the figure is a saint, they are depicted as with pale skin; otherwise, characters are depicted with a darker skin tone. Here, difference based on skin colour is meaningful in the shaping of information about a group of people, and proximity to whiteness (as articulated by skin colour), denotes proximity to the Holy. We noted the absence of race as a marker of social status in our discussion of racialized regimes of knowledge. While modes of racialisation clearly intersected with the shaping of gender and religious identity, this process does not appear to have informed labour exploitation and socio-economic distinction — at least not explicitly in the sources surveyed.

‘Byzantine Intersectionality’ presents eunuchs and eunuchism as belonging to a ‘non-binary’ gender category, which provoked a wider discussion about Byzantine gender as a productive, dynamic social identity. As New Critical Approaches Network member, Jules Gleeson, pointed out, in Byzantine texts, eunuchs are often depicted as filling male-gendered roles in Byzantine society. The struggle in scholarship to account for Byzantine eunuchs results from a difficulty in conceiving of eunuchs as embodying masculinity, albeit a contingent one. Eunuchs filled male-gendered roles in Byzantine society, functioning as priests, generals, even while they were barred from having wives. Eunuchs fully participated in statecraft and empire-building, while discursively being rendered effeminate. Although gendered with privilege, eunuchs were sometimes cut off from the full spectrum of male-gendered privileges. Thus, even when taking into account the interstitial condition of eunuchs, the discursive shaping of information still sustains a binary. Gleeson questioned how far an assertion of eunuchs’ non-binariness can hold in their own context: does the attribution of non-binary/gender-queer identity best highlight the in-betweeness of eunuchs? Or does it risk downplaying the prevalence of a more variegated form of manhood than our own societies typically allow? Ultimately, the unsettling of fixed gender categorization by the existence of figures such as eunuchs opens up the repressive dimension of Byzantine society. Eunuchs are described as men and operate as such, until an access is cut off.

Byzantine texts and images offer fertile ground for speculation about social identity. Although ‘Byzantine Intersectionality’ employs medical literature, its commitments are clear and social identities are framed as such. For example, the medicalisation of sexual difference is demarcated from discussions of gender proper. In its discussion of female genital mutilation practices in Byzantine medical literature, ‘Byzantine Intesectionality’ (employing the work of Valerie Traub) carefully navigates the internal logic of a medical discourse for a medically unnecessary intervention. Betancourt shows that female genital mutilation retains a specificity in Paul of Aegina’s medical manual, and is separated from other forms of genital modification — including procedures aimed at intersex people. Betancourt discusses the ambiguity of the description and commentary of female genital mutilation, highlighting several contradictory textual elements. Namely, that modification of the vulva is not understood to curtail sexual desire and that modification may be explicitly aesthetic (according to indeterminate metrics) while remaining pathalogized. Incidentally, Paul of Aegina’s translator annotates this passage with orientalizing tropes, situating the practice ‘in the East’, and effectively mirroring a highly common modern discourse that dismisses female genital mutilation as something that happens elsewhere (often while ignoring its local practice). The socially repressive dimension of medical knowledge is made salient by Paul of Aegina’s nineteenth century translator, Francis Adams, who was concerned that his contemporaries (women) might gain access to Byzantine medical knowledge about performing abortions.

There are many new avenues for research that ‘Byzantine Intersectionality’ opens, such as how to write the lives of ordinary people: the common Byzantine, the labourer.  How do gender, sexuality, and race intersect with class? How did the demands of surplus-production tie in — or intersect — with gender oppression? The sources we use to construct social history create all sorts of obstacles for accessing the ‘real’. Saints’ lives allow us to access an imagined subject. Although these texts offer models of emulation, we should be under no illusion that their staging of multiple social identities in Byzantine texts also depicts Byzantine society as managing lives (of saints and the toiling majority alike) through a repressive regime. After all, there is an ambiguity at the heart of Byzantine religious literature, especially saints’ lives — namely, that these celebrate what is normally prohibited in canon law.

‘Byzantine Intersectionality’ is the product both of advances in critical theory and of emancipatory politics. The mode of argumentation and presentation of sources reflects a consciousness of forms and processes of marginalization and exclusion. The author of ‘Byzantine Intersectionality’ bravely makes explicit his position, which is one of community-building and intersectional emancipation. Betancourt’s attentiveness to his readers is palpable in the handling of potentially sensitive material. Betancourt consciously offers an affirmative message about the long history of social identities, even where these are denigrated or repressed by medieval authors and in medieval sources. ‘Byzantine Intersectionality’ should be approached with these nuances in mind, and critique should be offered responsibly and self-reflexively. 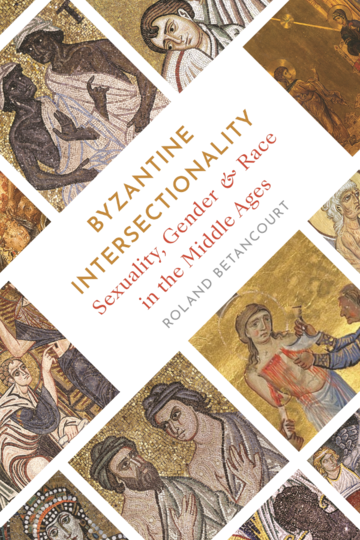