In the Mind of Ralph Ellison

In the Mind of Ralph Ellison

At the end of last month, thanks to generous funding from both the RAI and the English Faculty, I spent three glorious days in the Rare Books Room at the Library of Congress, Washington DC.  My task was to consult selected works from the personal collection of Ralph Ellison – not books that he had written, but books that he owned, read, and annotated.  The Library houses some 2,500

volumes that Ellison owned in a dedicated ‘Ralph Ellison Reading Room’; he is one of only four authors to enjoy this privilege in the entire institution.

In May 2014 I had spent a few tantalizing hours in the small but beautiful Ellison Room when I attended an Ellison Society seminar. Back then I had been able to see the spines of the books that I wanted to consult - his copies of Aeschylus, Sophocles, Homer, and so on – but they were all locked up and untouchable.  But now, having pre-selected around 30 volumes from the 140-page catalogue of the collection, I was able to hold, open, read, and photograph the texts themselves.

Why did I want to do this? I am writing a book about Ellison’s engagement with Greek and Roman tradition.  While this primarily involves close readings of his own fiction and non-fiction, it has also been invaluable to think about what he himself read, what he knew, and what might have been going through his mind at different periods in his creative life.  In such an approach I am theoretically unsound: I am guilty-as-charged of the ‘intentional fallacy’, and of refusing to acknowledge ‘the death of the author’.

But how can it not be relevant that Ellison, who pondered long and hard about the relationship between the power of the individual and power of the state, has marked up his copies of Seven against Thebes and Antigone?   That, as a writer profoundly interested in ritual, he laboured over Jane Ellen

Harrison’s Themis, Campbell’s The Hero with a Thousand Faces, and A. M. Hocart’s The Life-Giving Myth?  That in early 1948, as an impoverished and little-known journalist and short-story writer, he spent  a full $7.81 on a hardback copy of Thomson’s Aeschylus and Athens: A Study in the Social Origins of Greek Drama, in which the named and dated receipt still hides?

To experience something of Ellison’s own encounter with this material has been a profound and energizing privilege. It has been humbling to apprehend the vast and eclectic intellect of this writer, and to recall that back in 1933, as a twenty-year-old beginning his degree at the Tuskegee Institute in Alabama, he had so little money that he travelled there from Oklahoma City by ‘hobo-ing’ on the roofs of freight trains, both risking and encountering all the racist violence of the Deep South as he did so.

There is one annotation that has inscribed itself indelibly in my mind. A.M. Hocart (in The Life-Giving Myth) describes ‘Hellenic society’ as ‘one which has such a reserve of wealth that it can afford to maintain an intelligentsia exempt from the pursuit of bare life, and free to devote all its energies to intellectual play, to poetry, and to romance’. By Aristotle’s day, he asserts, Greek society had ‘so far freed itself from mere labour that it had come to despise it’.  In the margin next to these lines, Ellison has written just two words: ‘by SLAVERY’.  The upper case and the underlining are his own.

Tessa Roynon is a Research Fellow at the Rothermere American Institute. She is the editor of this blog, and co-founder of the new TORCH network, ‘Fiction and Human Rights’ (www.torch.ox.ac.uk/fiction-and-human-rights). 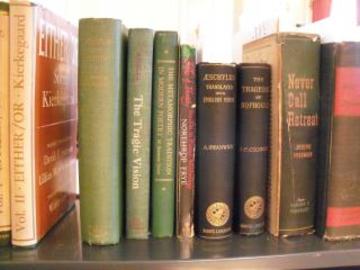