Is the Future Covfefe? 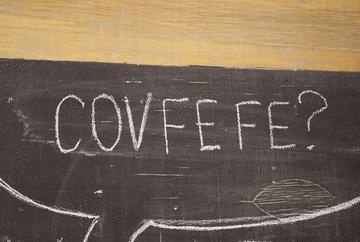 Donald Trump invented a new word this summer. “Covfefe!” he tweeted, and we were all a bit confused.

But could Trump’s covfefe one day find its way into the dictionary?

Simon Horobin, Professor of English Language and Literature at Magdalen College, has spent years studying the English language, and he thinks that technology is changing how we use it.

On social media, e-mail and WhatsApp, speed is important. This means we often use abbreviations, make new words up entirely, or fall victim to the typo.

But, Professor Horobin says, in some ways this doesn’t actually matter. “In certain media, it’s almost expected and understandable.”

And, for what it’s worth (FWIW), there are a few examples of internet slang creeping into the dictionary. In case you missed it (ICYMI), both FWIW and ICYMI made it into the Oxford English Dictionary in 2016.

So did ‘listicle’—which, for those of you who don’t live on Buzzfeed, is not a sea creature but “a journalistic article or other piece of writing presented wholly or partly in the form of a list.”

Professor Horobin argues that technology and social media can make these new words more visible. “This kind of slang has always been around, but the difference is that now it spreads much more quickly,” he explains.

But who is in charge? Who decides what ends up in the dictionary? The answer might surprise you.

To decide what goes in a dictionary, editors analyse a huge amount of data, including printed material, websites, social media feeds, forums, blogs, and e-mails. They look at how often words are used, and how people are using them.

This is because dictionaries are descriptive rather than prescriptive—they don’t tell us what to do, they just describe what we’re already doing. This means that, ultimately, new words and spellings come from us—the users.

So does this mean covfefe is going to worm its way into the OED?

Well—no. Compiling the dictionary is a complex process. “It doesn’t mean that every time you fire off an e-mail, you create a word,” Professor Horobin says. “Or that covfefe is going to appear in the dictionary.”

And while spelling mistakes are often more expected on social media, this doesn’t mean they go unnoticed.

“The internet has also given a new lease of life to correcting people,” Professor Horobin says. “Just look at #spellingfail on Twitter. There are a lot of people policing other’s mistakes.”

Ultimately, Professor Horobin says, “it’s still going to be important to get a good grip of standard English.”

Mr Trump might have covfefe to himself for now. But technology is still changing the English language in ways we haven’t seen before.

“The technological revolution means that spelling is much more fluid and there’s a different attitude to correctness,” Professor Horobin argues. “English is changing very rapidly.”

So you’d better keep practising your spelling—but you can also keep on abbreviating, inventing, and firing off misspelt tweets. In fact, you never know—as you do, you could be creating the English of the future.

This blog is from the Artistic License series written by Bethany White (DPhil Candidate, Faculty of History).