“What IS Futures Thinking?” one conference delegate asked me right before my opening address. And so we began. Futures Thinking is our network’s answer to industries and fields of study that fail to incorporate ethics or consider their global impact, and that neglect to ask the questions that the Humanities deal with all the time. It is, very simply, thinking, deeply, carefully, considerately, broadly, creatively, about the future. It does what it says on the tin. The plurality signalled in the name of the network is significant: there are manifold possible futures and we need to think about how certain futures might come about and how we build a future worth living in. 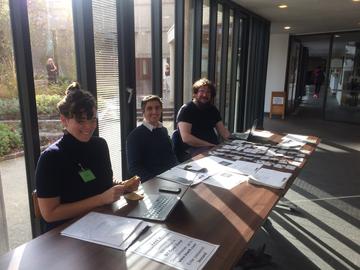 Those are by and large the questions that conference delegates addressed at the inaugural Futures Thinking conference held at Wolfson College from the 1st to the 3rd of October. The conference was conceptualised to bring together researchers and practitioners in multiple related fields that might not otherwise connect. Interdisciplinarity runs the risk of producing generalisations and shallow research, but centred around a common cause, an interdisciplinary conference such as this one can reveal exciting theoretical methods and intersections that might not otherwise be noted. That is exactly what happened. In the very first panel session of the conference, Stephen Cave, Kanta Dihal, and Olivia Belton from the Centre for the Future of Intelligence shared a panel titled ‘Imagining Intelligent Machines’. This set the tone for the conference. Their presentations were grounded in literary studies, sociology and political theory, but their topic was robots and machines that learn. From the creative solution of drones operating as umbrellas to the paradox of robot slaves being figured as ethnically white, ‘Imagining Intelligent Machines’ ranged across scholarly fields to yield insights into how and why robots are designed and what we perceive as their function.

Following this was Marcus du Sautoy’s keynote which drew on his recently published work The Creativity Code: How AI is Learning to Write, Paint and Think. Du Sautoy presents a radically optimistic view of AI and explores the question of what art might reveal about the functioning of an artificial intelligence. Switching gears after lunch we proceeded to two parallel sessions, one titled ‘The Quantified Self as the Measure of All Things’, the other ‘Digital Justice and the Shape of Societies to Come’. EL Putnam, Noel Fitpatrick, Conor McGarrigle, and John Kelleher wove art and big data into a seamless panel that explored how art can be used to process and communicate big data through projects such as #RiseAndGrind and how and why we measure human optimisation through apps to which we give our data. The panel presented the essence of what interdisciplinary work in this field can look like and how important art is to technology studies. As McGarrigle put it: “Machine learning is too important to leave to data scientists.” In their panel Catherine Pope, Tetyana Krupiy and Jagjit Kaur presented papers on health care triage by AI, racial profiling by AI assistants and the use of digital technologies in Indian schools.

The second session of parallel panels in the first day continued after a well-earned tea with vegan croissants. Leah Henrickson, Charlie Smith, and Sabine Thürmel presented on a panel titled ‘The Shifting Nature of Identity in a Digital Society’ looking at natural language generation (NLG), digital identity and self-presentation, and predictive algorithms. Running concurrently was the ‘Science Fiction – Writing Another World’ panel featuring Chen Ma, Lucy Nield and Christine Aicardi. Chen and Nield presented work on science fiction texts The Time Immigrant and The People of the Sand and Slag, while Aircardi presented her recent sociological field work bringing together science fiction authors and tech designers, noting that the participants developed a “new perception of the role that sci fi, beyond its intrinsic entertainment and literary value, may play in opening up debates around science, technology and the future we would like to live in.” 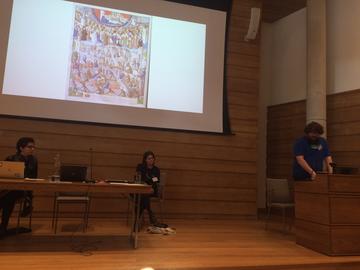 The day concluded with a wine reception in the Wolfson College café and expressions of delight in the conversations had in the course of the first day from several of the participants. “It has been really refreshing to be here,” John Kelleher said. It was a pleasure to include in the day’s proceedings David De Roure from the Wolfson Digital Research Cluster, one of our funders, and to see Elleke Boehmer passing through the college. Many thanks to them both for their support of the conference and the Futures Thinking network.

Day Two promised to be busy and long with an evening social event on the programme. We began with an intense and insightful panel session in the auditorium featuring Clouds Haberberg, Kate West and Dan Holloway speaking about inclusivity in future-oriented discourses. Holloway described the panel as looking at how “those who have different ways of being in the world can offer alternative and useful visions of how we conceptualise the future.” Heloise Ardley, founder of School for Rebels said that the panel was “though-provoking” while Christine Aicardi felt the panel was “amazing, humbling, eye-opening”.

Following tea the conference delegates were once again forced to choose between two excellent panels: ‘Publishing Futures and Machine Learning’ and ‘Making Spaces, Making the Future’. The publishing panel from Laura Dietz, Abbie Smith, and Eric White and John Twycross ranged across interrogations of Amazon’s recommendation algorithms to the possibilities for AI in the publishing industry to the AGAST Reading Machine project. “Addressing the future of reading, we delve into the past,” explained White and Twycross on their avant-garde project which considers how and what we read and how we focus our interest. In the ‘Making Spaces, Making the Future’ panel Christian Keller, Bronwin Patrickson, and Ray op’tLand discussed the role of the arts as both non-philosophical and non-scientific, design fictions, and makerspaces. 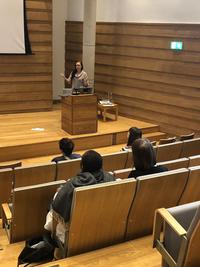 After a veggie lunch featuring some especially good chocolate brownies (compliments to Wolfson College’s catering staff) we settled into the afternoon sessions, beginning with Alex Goody’s keynote address titled ‘Playing the Future: Thinking Possible Worlds and Possible Selves through Westworld’ which offered a Deleuzian reading of the hit HBO television series through the concept metaphor of ‘the garden of forking paths’ in Jorge Luis Borges’ short story of the same name. Having had our minds thoroughly boggled by Goody’s seamless synthesis of feminist theory with posthumanism and television analysis we paused for tea before learning about The LitHits Digital Reading Project from Kirsten Shepherd-Barr and Alexandra Paddock. Sharing their research as well as the project, Paddock explained: “This is a project that tries to harness technology for reading.” Reading styles have changed with technology and it is necessary to reflect on who or what we are conjuring when we think of reading in terms of leisure and when we demonise reading that is fragmented, ‘skimming’ or mediated.

Following this a group of conference delegates went for dinner at Mamma Mia Pizzeria in Jericho before heading to the social event of the conference, comedy at Jericho Tavern organised by the good people at Jericho Comedy! The stand-up gig was themed around ‘AI, Technology and the Future’ and the four acts did not disappoint with the venue at capacity and wonderfully funny and philosophical considerations of AI and notions of the self in particular from local comedy stalwarts Alex Farrow and Chelsea Birkby. 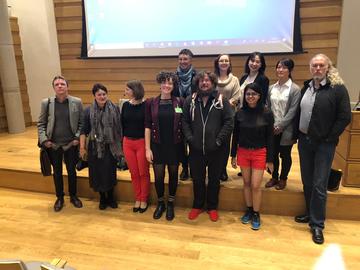 After a late night of laughter, the third and final day of the conference began slowly but quickly warmed up with considerations of technology’s role in the past, present and future of psychology and mental health from Ulrik Lyngs, Madeleine Chalmers and Dan Holloway. The conversation surged back on forth on how best to build online platforms accessibly, with Lyngs proposing a baseline model on to which users can add widgets to suit their needs, describing the opposite of our current experience of online products and apps. The final parallel sessions of the conference took place after a last tea. Tomoko Kitagawa, Robert Laidlow, and Giovanni Colavizza and Massimo Franceschet presented interesting applications of technology in the arts and humanities on the ‘Modalities, Music and Art’ panel. Kitagawa described her work using VR and podcasts in the history classroom, Laidlow explained that the use of AI in music composition is one of translation not “robots writing music”, and Colavizza and Franceschet discussed their work with crypto art. Peaks Krafft, Amillin Hussain, and Tomas Čiučelis discussed philosophy and the application of technologies to urban resistance movements on the ‘Urban Spaces and Future Selves’ panel.

The conference wrapped up on time and in good order, with expressions of interest in future collaboration and much exchanging of business cards. Thinking about the ‘messiness of life’ I thanked our speakers and conference attendees, without whom the conversations we had hoped for would not have happened, and whose contributions helped us to make some sense of the looming spectre of ‘radical uncertainty’ in the future that we can as yet only imagine. My thanks also went out to Dan Holloway, Ilan Price, and Anne Ploin for their help, and to Chris Burr in absentia, and to the FT committee. Futures Thinking was begun as a space to foster conversations between fields of scholarship that might not otherwise intersect, to make these conversations happen where we could access them and above all to learn how people are thinking about the future, what is being said, within what frameworks and under what circumstances. What we wanted from Futures Thinking was to learn an about how we narrativise the present and the future, and to talk and think in community. And that we did.