The second lecture in the ‘Moving Teaching Inspiring’ series, entitled ‘Land, Outdoors and Nature’, took place on 23rd February. Despite the ferocious winds of hurricane Doris, this lecture was well attended by both National Trust staff and Oxford University researchers, all of whom braved the weather to hear talks given by Peter Nixon, Director or Land, Landscape and Nature at the National Trust, and Professor Heather Viles, Head of the School of Geography at the University of Oxford.

Picking up on many of the threads from the previous lecture, the evening’s discussion outlined land management at the National Trust, and explored the many ways in which Oxford researchers can support the charity in approaching the various environmental challenges facing our landscape today.

Peter Nixon began with a powerful – and heartfelt – presentation about the importance of land, not only to the National Trust, but also to the economic and ecological future of the country more generally. As a custodian of over 250,000 hectares of land – 80% of which, Peter told us, is rented out and worked by farmers – the National Trust has an especial responsibility to ensure both the protection of the UK’s natural resources, as well as the productivity of the country’s land.

The principal problem facing the National Trust’s landed assets, Peter explained, can be reduced to the simple observation: land is in fixed supply, yet society is placing increasing demands on that land. Added to this general problem are a whole host of related issues, including increased disconnection between the people and the land, as well as the illusory idea that human beings have ‘conquered’, or become independent of, nature through technological advances in agriculture. Peter also told us that there is an array of pressing global environmental issues with which the National Trust must engage, such as rising sea levels and more intense rainfall (affecting the management of both coasts and rivers), along with challenges brought about by the post-Brexit political climate, including the prospect of the disappearance of EU subsidies to British farms. This last issue is particularly pertinent to the Trust’s many farmers, all of whom are facing a very uncertain economic future.

To confront these issues, Peter informed us that the National Trust’s land management must become ‘better, bigger and more joined up’. Put simply, this means that in order to improve nature the Trust need to work at a landscape scale where possible, collaborating with others when relevant to reach beyond their own immediate boundaries.

There are several smaller goals within this overarching vision, which relate to Trust’s dual responsibilities of preserving natural heritage and ensuring continued productivity of its farmed land. These goals include promoting healthy soils and water as well as rich and varied wildlife; ensuring that National Trust land remains culturally rich, beautiful and accessible to the public, and also working with farmers to maximise the productivity of lands under the National Trust’s care. This last aim relates especially to the Trust’s mission to help its farmers navigate and come to terms with the uncertainty created by recent political developments.

Heather Viles’ talk focused on how geographers at the university can support the National Trust in responding to the varied and multi-layered challenges outlined in Peter’s presentation. As well as engaging in related research, Professor Viles suggested that Oxford geographers can offer three key insights which will help the National Trust face its environmental challenges. Firstly, geographers at Oxford are wrestling with issues of uncertainty and how to deal with it; an issue which the National Trust is currently being forced to confront. Secondly, geographers are adept at dealing with environmental change over time, and view landscapes as a palimpsest, or a canvas which has changed over time. Thirdly, geographers are also equipped to study geo-political conflict, therefore Oxford researchers in the School of Geography can help the charity navigate the recent challenging political developments. Professor Viles concluded on an optimistic tone and looked especially towards masters students – whose dissertations all address issues relating to the natural environment – in spearheading this important knowledge exchange which can aid the National Trust in confronting the environmental challenges of the modern age.

Questions focused on a range of issues, including the importance of communication in facilitating the partnership between our two organisations. Professor Viles pointed out that science is not science if it is not communicated, and argued that ‘communication’ should be viewed more as a ‘conversation’ with a partner. Peter Nixon agreed, alluding to the importance of social media and the need for the National Trust to engage more directly with such communication trends to ensure the charity remains receptive to the demands being made of it, and to new research.

Audience questions also picked up on the issue of ‘disconnect’ between people and nature. Peter Nixon suggested that one solution to this might be to focus on the next generation, and to use social media to offer solutions to this audience so that they develop more interest in the natural landscape and the issues affecting it. Professor Viles then suggested that reconnection could also be brought about by taking children to the countryside, for example on field trips and study days. A member of the audience then asked if recent cultural trends in fact suggest that urban populations are trying to reconnect with nature, through activities such as outdoor swimming, cycling and nature photography, and that disconnect from nature might actually be more pronounced in rural areas. Peter Nixon acknowledged this recent boom in outdoor activities and the ‘thirst to reconnect’ with nature, and he agreed that increased technology in agriculture may be having an alienating effect on rural populations. It was concluded that people may in fact be engaging with nature in newer, perhaps less traditional ways, and that the National Trust must make an effort to understand this if it is to bring more visitors to its countryside.

The next lecture in the MOVING, TEACHING, INSPIRING series is at 5.30pm on Thursday 9th March 2017, St Luke’s Chapel. Full details about this lecture and all others in the series here. 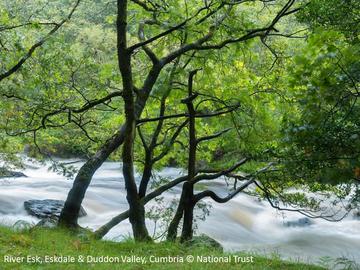