In his remarks at our first panel-led workshop, ‘Poetry and Life-Writing’, Philippe Sands, QC discussed the ways in which the courtroom represents a place for the telling of stories. Inevitably, the legal process results in some stories being told and others being ignored, but this treatment of the judicial space as a place for narrative indicates a willingness to entertain an overlap between the study and practice of law and literary criticism. In some cases, this might even result in an aestheticization of the courtroom. But for the writer Rebecca West, who worked as a reporter during the Nuremberg Trials, the event was deeply unsatisfactory. As Lyndsey Stonebridge, one of the panelists at our Textual II workshop, notes in The Judicial Imagination (2011), for West, Nuremberg ‘failed to deliver an aesthetic of judgement adequate to the crime.’

Considering the courtroom and the dispensing of justice as an aesthetic experience goes far beyond notions of courtroom drama or the performance of a barrister. Instead, as Stonebridge demonstrates in her compelling study, which traces the responses to postwar events of five women writers (West, Martha Gellhorn, Muriel Spark, Elizabeth Bowen, and especially Hannah Arendt), literary figures recognized in this moment a chance for radical change. For Stonebridge, the ‘law was at its most audacious and creative in the immediate postwar period’, and events like Nuremberg must have seemed a glorious opportunity – not to exact revenge on the remaining Nazi figures on trial, but in a much broader sense to reassert, even refashion, the rule of law. As Stonebridge puts it, what was needed was ‘a way of imagining how what had happened profoundly changed the ways in which it was possible to think about justice and judgment in the first place.’ As she goes on to discuss later in the book, this would certainly mean a reassessment of the role of the writer and the role of art in postwar circumstances (a concern that motivates our Post-War series as well), and also an interrogation of the very forms of writing that engage in that response. Is a novel, for instance, an appropriate way to present a postwar narrative, or would some hybrid form be a more suitable way to express suffering and trauma? Should the novelist think of themselves as an historical or ethical witness (a topic that Aminatta Forna discussed in the opening event in our series), and make use of the kind of testimony that was such a significant part of the 1961 Adolf Eichmann trial? Stonebridge quotes from West to show how both the justice system and literature have always been grappling with this question: ‘the law, like art, is always vainly racing to catch up with experience.’ But this relationship between justice and literature risks being undermined by the situation that Europe found itself in post-1945. A key concern in The Judicial Imagination is the tension between the need for justice in a postwar world and a situation where Nazism has rendered law and justice irrelevant, or as Stonebridge puts it, ‘what it means to think, to be a speaking being, in a world that can no longer make judgements.’

The language used to speak or name acts of atrocity (one of the main subjects of Sands’ book East West Street discussed elsewhere on this blog) and then later describe or narrate those acts, has serious implications for how and what is written. How – or why – to put into words what happened when it might be better to keep silent? But as Stonebridge notes, this struggle with language can be empowering and educative: ‘for Arendt, to speak “as” a refugee is not simply to claim missing rights; it is to enact that deprivation in language.’

If literature can, in its very form, mimic the sense of statelessness, can it also set the tone for reflection on the postwar condition? And if so, what tone should that reflection adopt? In her response to the critics of Arendt’s work on the Eichmann trial, Stonebridge argues that rather than see the author’s ironic approach as a ‘self-distancing disdain for […] survivors’, instead we should consider that ‘irony might well be the narrative mode most appropriate for the writer who wants not only to encounter the past, but to judge it.’ One of the criticisms aimed at ceremonies of commemoration is that they merely stage an encounter with the past. Rather than affect an earnestness about the commemoration of conflict, are we brave enough to adopt a tone, such as irony, that allows us to critique it too? And if so, what would such a commemorative act look like? 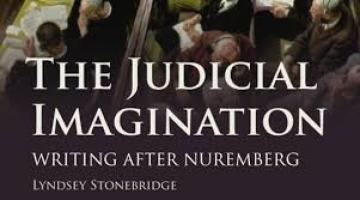