Over the course of its 1500-year history, the late Roman building known as the Hagia Sophia (Holy Wisdom) has served as the setting for many ceremonies, religious, political, and more often than not, a combination of the two. On July 24, 2020 Hagia Sophia served as a political theatre for a symbolic re-conquest of the building via its reversion to a functioning mosque. For those who saw this ceremony as a form of erasure of the Byzantine past, it was quite the opposite. The polyvalence of the Roman building, synthesizing a Roman basilica, Byzantine church, Latin cathedral, Ottoman mosque, and museum, is evident in the fact that it has served as a template for religious architecture that the Ottomans and, more recently, Turkey have exported internationally. Furthermore, Hagia Sophia’s Byzantine past was key in the (re)-staging of the 1453 conquest of Constantinople by the Ottomans, which combined the narrative of the city’s capture with the Turkish government’s current political project.

There have been many excellent articles written on the politics of the reversion, including this useful series in the Berkeley Forum, and the post-reversion months saw a number of international discussions of the issue. I have written elsewhere against essentializing Hagia Sophia’s reversion to a mosque, which can be viewed in terms of global conservative tendencies, but must also be viewed in terms of Turkey’s national and regional politics. After all, the foundation of the Ayasofya müzesi/Hagia Sophia Museum in 1934 has been re-framed, by the Turkish government, as an act of self-colonization, a nod to secular western sensibilities of that time. That the reversion of Hagia Sophia was designed to boost Prime Minister Recep Tayyip Erdoğan’s programme of de-secularization, a stridently anti-secularist and anti-Kemalist political programme, should now be clear. However, following a series of interlinked crises,  the fanfare around the recent reversion of several Byzantine monuments has failed to resuscitate the regime’s initial popularity, and has further contributed to the growing political and economic power of the country’s religious authority, the Diyanet.

Although the reversion of Hagia Sophia to a mosque drew the world’s attention this past June, it is neither the first nor most recent Byzantine-era building to have been reverted by the Turkish government. Already in 2011, the decision was taken to revert the Iznik Hagia Sophia—the site of the 787 CE Church council, convened to address the first Iconoclast Controversy—to a mosque. This move was followed by the reversion of the Trabzon Hagia Sophia in 2013. Following the opening of the Hagia Sophia Mosque in June, there was speculation as to whether the decision taken to revert the Chora Museum would be acted on. It came as a surprise when it was decided that the building, which had recently undergone a full restoration of its late Byzantine mosaics, would again become a functioning mosque. The impetus for expressions of concern about what might happen to the middle and late Byzantine mosaics and frescoes housed in these buildings, revolved around whether and how these would be covered during prayer times and beyond. For example, for the July 24 prayer, the apse mosaic depicting the Mother of God with the Christ child was loosely covered with white cloths held in place with ropes and pulleys, which still remain in place. Various solutions have been trialled for the Trabzon Hagia Sophia, including an opaque screen and a large light fixture that brightens or obscures the Byzantine frescoes located in the main prayer space. As for the Chora, it appears that a system of automatic, retractable screens has been installed to cover the mosaics.

The main controversy surrounding the mosaics was centred around the orientalist trope of ‘Islamic iconoclasm’—in reality, aniconism, with moments of iconoclasm mirroring those that shook the Byzantine Empire in the 8th and 9th centuries. However, the line of argument positing these reversions as a ‘return to’ a previous, aniconic state, elides the long and varied history of these monuments as Ottoman mosques. Over the course of the 600-year history of the Ottoman Empire, during which the abovementioned buildings functioned as mosques, their Byzantine iconographic programmes remained on (at least) partial display. After the Chora was converted to a mosque in the early 16th century, many of its mosaics remained visible for at least a century following the conversion. Some mosaics, including the cycle of the Holy Virgin, remained visible throughout the Ottoman period. This is why the building was informally known as the ‘Mosaic Mosque’. Historians, including Cyril Mango, Nevra Necipoğlu, Çiğdem Kafescioğlu, have pointed to the fact that travel accounts (those of Guillaume-Joseph Grelot in the 17th century and Cornelius Loos in the early 18th century) from the Ottoman period describe, quite accurately, Byzantine mosaics and frescoes in Hagia Sophia. Therefore, some figural art, including the (now-covered) apse mosaic of the Mother of God, was on display for much of the Ottoman period and only covered later in the 18th or early 19th century. Following the 1847 restoration of Hagia Sophia—during which many mosaics were uncovered then re-covered—the official re-opening ceremony, held on July 13, 1849 in the presence of Sultan Abdülmecid, was accompanied by the publication of two books: by Gaspare Fossati (1852) and Wilhelm Salzenberg (1854). Both books depicted the building in its Ottoman context with the re-covered mosaics displayed. Following the foundation of the Hagia Sophia Museum in 1934, the plaster from the 1847 restoration was removed, and the restoration work undertaken (between 1934 and 1953) revealed that the mosaics were still intact.

Recent events call attention to the reality that now, as in 1847, heritage management is a top-down matter. For now, the partial or full obscuring of figural art in these buildings aside, their integrity has not been seriously compromised, unlike the total destruction of sites like that of Sur in Diyarbakir or the flooding of Hasankeyf, actions which dispossessed and displaced numerous people. I have argued elsewhere that heritage management is best undertaken democratically. Employing a top-down institutional rationale to heritage only reinforces the gap, in terms of time, expert knowledge, and value, that exists between the administrators (whether the local ministry of culture and tourism or UNESCO) of cultural heritage and the wider population. Furthermore, the criteria for conservation often privilege a valuation based on the metrics of age, state of conservation, and monumentality to ascribe meaning to designate cultural heritage sites. Oftentimes, this sort of valuation overlooks the varying sites of memory, unofficial and overlapping, that make a site valuable to a given community. At times, this layering, later stripped away by modern archaeology, is what conserved ancient structures; for example, the Arch of Marcus Aurelius in Tripoli or  Old Palmyra. The stripping away of layers often occurs because monuments are political instruments, a sort of museum-ified regalia of the state (and nation), functioning as proof of its legitimacy. However, layered monuments like Hagia Sophia resist linear narratives. When viewed diachronically, such monuments can be a powerful didactic tool for a complex social and political history, one that can easily counterbalance the tunnel vision of modern cultural politics. 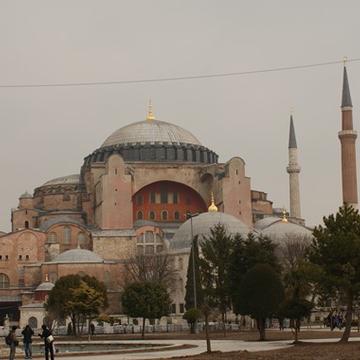