One of the difficulties that almost every historian faces is striking the right balance between narrative on the one hand and detail and exposition on the other.  For a book or article to be anything more than mere antiquarianism, the listing of details and facts for the sheer pleasure of communicating them, it must be integrated into a wider argument, and preferably reach beyond that to engage with a broader set of debates or discussions within the historical profession and the wider world.  Studies of ‘historiography’ or the history of historians writing about history show how the discipline as we know it today emerged from two distinct strands.  The first strand goes back to the Greek and Roman historians such as Herodotus and Tacitus, who looked to the past as a guide to modern political and moral conduct.  Details were necessary as examples, but were never allowed to stand in the way of a good argument; indeed, sometimes writers gave speeches that leading figures would, could or even should have made, even if the reality was somewhat more mundane.  The second strand were the antiquaries, such as those of Tudor England, who aimed to collect and publish all the details they could find about a given area, often their own county or town, sometimes more as an act of piety or to glorify its past.  The tension for historians today is to balance these two elements, and to find a way of structuring books and articles that can develop an argument logically while forcing complex and confusing details in some kind of order, without having endlessly to repeat, cross-reference or ignore those details.  When chronology is introduced, things get even harder.  Things often do not develop in order but occur around the same time, and a good argument needs to balance the chronology of a given narrative against the need to pick apart common themes and analyse them together.

All this is a slightly long-winded way of noting the complexities of drawing up a narrative for the audio tour of Canons Park and the Duke of Chandos.  Part of what makes him so interesting is that he was a man who involved himself in so many different aspects of the early eighteenth century, without ever committing himself fully to one.  Besides being one of the leading collectors and connoisseurs in Britain during this period, he was also a noted financial speculator and investor involved in enterprises like the South Sea Company and Royal African Company, as well as a significant political figure, and a son, husband (several times over) and father.  These were not constrained to neat little boxes but densely overlapped with each other, chronologically and thematically.  Some of my own work, for example, has been to show how Chandos used some of the official networks he organised in Europe as Paymaster of the Forces Abroad during the War of the Spanish Succession (1702-13) to begin collecting artwork, wines, textiles and even snuff and other luxuries.  These connections persisted after he retired in 1712, however, and were used to help him find furnishing and ornaments for the house and gardens he began to construct at Canons Park after 1714.  A simple chronological format is plainly inadequate to tell his story and that of Canons Park, but neither can it be purely thematic, and certain details need to be introduced in the right place to avoid the need to repeat them.

All this is made even more complex because the audio tour moves not just in time but in space, since its underlying purpose is to link the story of Chandos and Canons Park with the heritage still surviving there.  Ideally these remaining pieces of heritage, such as the parish church which Chandos renovated and in which his orchestra first played the works which Georg Friedrich Handel had composed, will be linked up with the relevant parts of the story (see the photo with this post for a view of the interior).  But it is inefficient, not to mention exhausting, to direct visitors endlessly around the park and forcing them to retrace their own footsteps, especially where there are no paved or tarmacked pathways between them.  As the recent weather shows, any audio tour has to be navigable even in winter when the ground is muddy, and accessible to people with physical disabilities who may not be able to leave the paths.  An important step in the process of making this audio tour was therefore to meet with my partners, the Friends of Canons Park – luckily before the lockdown came in – and to walk the park, in a socially-distanced way, in order to plan a suitable route and discuss the appropriate places for the audio segments to take place.  Since then, I have been working to match these up with the narratives and details about Chandos, so that visitors are able to understand his life and works in a roughly chronological order, but in a way which still makes sense, and matches up with the surviving heritage.

There is still a way to go with all of this, and once lockdown is over it will be necessary to walk the route a few more times in order to make sure that it works.  So far though it has been interesting and rewarding to wrestle that into shape, to decide what details are necessary from the start and which can wait, and above all to work to balance these elements of theme, place and space. 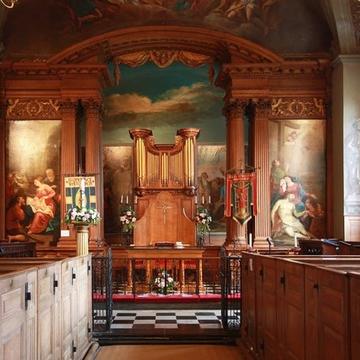