Opera as a process: the construction of The Gentlewomen

Our most recent project is a classic example of how performers and musicologists can come together to develop a new historiography of Renaissance Italy. A historiography is the telling of a history, or the narrative. All discussions of history have them, simply by how we frame events with other events, what rhetoric we use when talk about them, how we discuss the repercussions of events, or indeed, what events we choose to focus on. Often, by nature of how historiographies are conveyed (such as in books, essays, or lectures, even visual art), they are constructed by an individual person or a pair of people, who tend to have singular views on the impacts of these histories. To a certain extent, it is impossible to escape the lens through which we view historical events, a lens that is impacted by our gender, sexuality, race, or class. Increasingly, academics are encouraging a culture of collaboration in order to examine historical events through different lenses to get a more accurate view. It is still, however, hard to engage more than a handful of individuals on a project.

Enter the phenomena of performance. To perform history is to actualise the lens through which we view history in an entire bodily manner, generally involving more than handful of people (particularly in opera, where there is an entire production team, band and cast, not to mention stage hands and advisors). By its nature, there is contact with others, either in the form of your co-performers or with an audience. The lens through which you, as performer, view history is no longer apparent only to you, but to everyone, who in turn view such a lens through their own lens. This is how The Gentlewomen came into being.

It started with a story, told to those of us on the Musica Secreta course, in a tiny cafe in Triora, Italy. Dr. Laurie Stras, renowned musicologist, captivated us with the tales of the D’Este family and the women of the Concerto delle Donne, their lives and their experiences, throwing into relief a past world that is, in the words of L.P. Hartley, truly a foreign country. Or at least, that’s what we thought at the time. A world where women are indeed property, where their value is predicated on their ability to produce an heir. Those women who operate outside of this world, such as courtesans or performers, are playing a dangerous game by constantly creating value for themselves based on their talents. While many a woman, as Laurie told us, was horrifically murdered at the hands of male authorities, the case of Anna Guarini caught us particularly. A woman married, of high status, who when she could no longer rely on her musical talents for survival, and had no children, was deemed… worthless. In the words of our comrade Margaret Lingas, “she had everything going for her,” and yet the women of court could not save her.

We took it back to our comrades, and after talking about it, we thought this was it- this was the story we wanted to tell this year. But how? With what music, what story? Do we write an opera? We weren’t sure that was the way to go. That’s when I remembered some madrigals I had come across by Cesarina Ricci di Tingoli. I started piecing them together and acquiring translations from a colleague, and a picture became clear: what if we did a dramatisation of these? All of us had some Strozzi songs bouncing around that would be a perfect fit. Together, with Priya and the team, we started crafting a narrative, picking songs that fit with how we imagined these women might have felt. With the guidance of Laurie on family relations at the time and what resources were available for us to use, we put together a series of vignettes from scratch on the experiences of these women.

The madrigals were sounding lush, the songs tearjerking, and the recits written by Margaret, Emily and Ros had come together beautifully. But how to perform the recits? We tried putting the recits to continuo, and while I successfully tested this with a band member, it simply seemed to, well, disguise the story. Something wasn’t right. Priya brought up the opera Thumbprint (by Kamala Sankaram), and the depiction of violence within (which relies primarily on non-musical sounds). I remembered back to a talk given by Annalise Smith (from Cornell University) about how music can, if we aren’t careful, “paper over the cracks” of violence and terror. So what if we took the music away? What if we forced the audience to encounter the story flat out from a character, in contrast with the beautiful music they sang? With this in mind, we tested out some of the recits the three had written, readjusted accordingly to what worked and what didn’t. The result was a shade of Brechtian performance, an implication of something real behind the music.

While there is still debate within the team about the effect, the overall reception from audience members was, for the most part, incredibly positive, and it was all down to the collaboration. We made a narrative together, using a dozen different lenses of a diverse cast and crew. It was, in essence, as much a performance of musicology as it was a performance of music. We’re hoping to do The Gentlewomen again, and develop it further with an even larger team. We hope you will join us when we do! 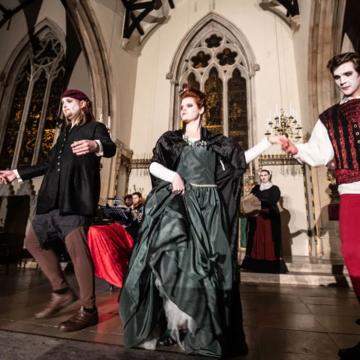