‘Other’ Worlds in Emily Dickinson’s Poetry

‘Other’ Worlds in Emily Dickinson’s Poetry

“Poetry” is a term derived from the Greek word “poesis” - “to make”.

Emily Dickinson’s poetry, in particular, “makes” the worlds it describes. Not by creating alternative worlds, but by reshaping the ways we can see this world.  She writes, “There is no frigate like a book/To take us lands away/Nor any coursers like a page/Of prancing poetry”.

Rather than routinizing the world around her, Dickinson’s metaphors re-“make” her surroundings in ways that that are meaningful, and even magnificent. Her worlds are places where “forests galloped till they fell”, where the “elements” are interchangeable and reversible, where “ships of purple gently toss/On seas of daffodils”. Limits become prefaces, as questions like “Can I expound the skies?” in one poem are answered in others; “ The brain is wider than the sky/For, put them side by side,/The one the other will include/ With ease, and you beside”.

Yet I think it is possible to suggest that alternative worlds are interwoven into Dickinson’s poetry in much the same imaginative way that Time, Nature and other concepts and themes are personified and familiarized.

For example, storm clouds are not just ordinary and customary weather tenets, but “like listless elephants”, they “horizons struggled down”.  Wintry weather is transformed into an evocation of far-away places and climates. There, “elephants” trundle about, “listless[ly]” ambling down “horizons”.

It is possible to say that Dickinson’s poetic restructuring of natural elements to speak beyond their tangible forms draws from tropes and images not readily associated with her own surroundings. This becomes a way for her not only to re-“make” her own world, but also to imagine worlds beyond her own. Read in this way, poetry, Dickinson’s “frigate”, becomes a way to voyage to distant places, and becomes those distant places themselves.

Read “against the grain”, however, such “far-away” poetic metaphor reveals several problematics. This is further seen in her poetry, most clearly when Dickinson writes:

I found the phrase to every thought

I ever had but one;

Did try to chalk the sun

To races nurtured in the dark

How would your own begin?

Can blaze be done in cochineal

Or noon in mazarin?

There are any range of interpretations of the phrase “To races nurtured in the dark”, which this pithy line simultaneously broaches and defers. Dickinson may be drawing from literary, cultural, or imaginative precepts in formulating this apostrophe. Her first question can thus be read with a range of tones: inquisitive, dismissive, or even hopeful.

On surface level, Dickinson’s second question can be read as a rhetorical question; cochineal is a shade of red, therefore within the color spectrum of a “blaze”. Generally the sky could be blue during noon, thus “mazarin” is a logical color for this time of day. Therefore, yes would be the answer to Dickinson’s question, it is possible to describe different climates and natural phenomena in the same color palette that she draws from.

On an analytical level, however, the reflexiveness of the question includes as well as closes the imaginative range of poetic capability of “Other” places and peoples. While it appears to be the same color palette that Dickinson suggests, it implies an “Other” vocabulary. Cochineal has roots in a “far-away” place, the Andes, as does “mazarin”; Europe. Does the poem suggest that different places require different vocabularies? That different “races” see and interpret similar (or different?) phenomena in different ways (intentionally or not?). Hard to say.

Zainab Al-Sayegh is a Masters candidate in the English department at Oxford University. 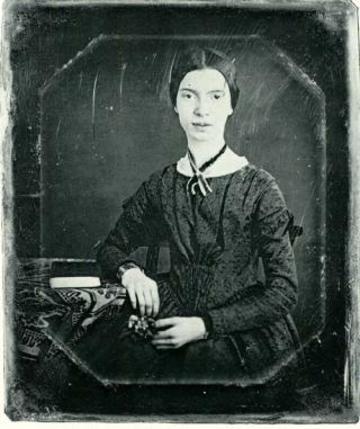