Researchers from the Faculty of Linguistics at Oxford University have been working on a project, called ISTROX, which will conserve and explore the history of the Istro-Romanian language with online help from the remaining speakers of the language.  Istro-Romanian is recognized by UNESCO as a ‘severely endangered’ language. It now has only a few hundred speakers left,  in Istria (Croatia), and in several émigré communities worldwide. This community-sourcing phase of ISTROX is being launched on the citizen science web portal Zooniverse. 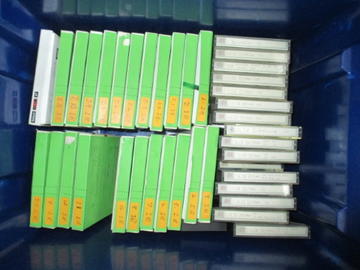 In 2010, the Taylor Institution Library (part of Oxford’s Bodleian Libraries) received an extensive donation of audio recordings of the Istro-Romanian language, made in the 1960s by the Oxford linguist Tony Hurren. Hurren worked with a large representative sample of speakers of all ages, and covered nearly all the villages in which Istro-Romanian was spoken. The recordings, which include folktales, accounts of local traditions, and autobiographical remarks and stories, are not just of crucial interest to linguists, but also contain unique documentation of the history of the community that spoke, and still speaks, the language. This material has never been published, and its existence has hitherto been virtually unknown to the wider world.

So-called ‘Istro-Romanian’ (a term invented by linguists: it’s called Vlaški or Žejanski by its speakers) is a Romance language, related to Italian, French, or Spanish, but most closely to Romanian, from which it separated perhaps a thousand years ago. Its structure has been profoundly and distinctively affected by centuries of contact with a Slavonic language, Croatian. Istro-Romanian is spoken today not only in the Istrian Peninsula in Croatia, but also, following waves of international migration, notably in North America and Australia.

The ISTROX researchers hope to access and involve in the project as many as possible of the remaining speakers of the language. They will be using online crowdsourcing – an answer to the fact that the speakers are scattered across the world but also to the current Covid-19 disruption, in a world where much research and teaching is moving online. Native speakers are the most precious and authoritative asset for the study of a language, and especially a disappearing one, so it makes sense to involve the remaining speakers of vlåški and of žejånski to help the research team understand the most problematic segments of the audio material gathered by Hurren.

The world’s largest and most popular online platform, where millions of volunteers from around the world come together to assist professional researchers, is Zooniverse.  Istro-Romanian speakers are scarcely a ‘crowd’ (as in ‘crowdsourcing’), but they are a community. Many of them are active online and deeply invested in the preservation of their linguistic and cultural identity.

The researchers behind ISTROX have uploaded on Zooniverse a selected body of archive audio material in Istro-Romanian and are inviting the remaining speakers of the language as peer contributors to the project, to help them understand and interpret the problematic elements of the material. At the heart of ISTROX is the idea of ‘co-production’, that is, the fact that research is conducted collaboratively with the Istro-Romanian community rather than being simply about it, or about their language.

One of the important goals of the project is to preserve a record of this disappearing language, both for linguistic scholarship and for the community of speakers and their descendants. Upon completion, ISTROX project will make all the (ethically cleared) original material and resulting research data available online for the benefit of scholars and the Istro-Romanian communities.

Professor Martin Maiden, Project lead, says:  “We hold a major part of the history of the fascinating but disappearing Istro-Romanian language, which could so easily have been lost forever. Thanks to the generous Hurren Donation, and with the help of native speakers, the ISTROX project is giving this material back to the Istro-Romanian community and opening it up to everyone interested in the language.”

From August 2020, ISTROX is live on the Zooniverse platform.
All speakers of Istro-Romanian are warmly invited to visit the platform, to get involved in the project and to get in touch with the project team.

ISTROX is a pilot-project funded by Oxford’s John Fell Fund. Apart from helping the researchers clarify some difficult aspects of Hurren’s recordings, ISTROX seeks to assess the number of speakers of Vlaški and Žejanski worldwide, and to establish a channel of communication with them. It is envisaged that the project will be developed further, so as to provide the foundation for a planned history of the language and the people speaking it. All the contributors to this online project will be credited in resulting publications.