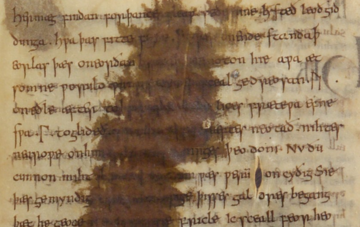 The runic signature of Cynewulf in The Fates of the Apostles, Vercelli Book folio 54r - public domain

One unexpected positive from the lockdown has been the large number of online seminars that have sprung up in the absence of the various conferences and other meetings that are the lifeblood of academic research. Linking scholars from all over the world to share research and get feedback on ongoing projects, some of these online seminars have proved surprisingly successful.

After conversations among a group of Oxford Old English scholars back in March, it was decided to set up a small, informal weekly work-in-progress group via the OMS channel on Microsoft Teams. While the initial plan was simply for an internal support group, soon speakers from other institutions were volunteering to give papers and WOOPIE was born. Within weeks numbers had sprung up to a weekly average of 40, with attendees from all parts of the globe tuning in. The seminar has proved popular with graduate students as well as academics all over the world.

So far, we have heard papers on topics ranging from contested readings and the editing of texts to recent archaeological discoveries, from the reception of heroic poetry in local guilds to an eleventh-century chronicler’s special interest in astronomy, from the interpretation of charms and riddles to the surprising role of humour in hagiography. Other presentations have explored the influence of classical and medieval Latin writing on Old English texts, as well as the copying of Latin poetry in manuscript form in early medieval England. WOOPIE continues over the summer, meeting every Monday at 4pm, with a full programme of papers until the end of September. For further details, contact francis.leneghan@ell.ox.ac.uk

Of course, we are all looking forward to getting back to face-to-face conferences and seminars once the pandemic is over. But the success of online events such as this has certainly proved an eye-opener. Perhaps in the future, more events will incorporate an online element, such as streaming a keynote lecture, opening up discussion to a much wider international audience.

(NB this is subject to change; for up-to-date information, please consult the Teams channel)

20th April: Rachel Burns, ‘A Monastic Micro-riddle in Solomon and Saturn I,

4th May: Rafael Pascual, ‘Beowulf 501b and the Authority of Old English Poetical Manuscripts’

18th May: Glenn Cahilly-Bretzin, ‘The Case of the Missing Ducks: Thematic Reshaping in the Transmission of the Anonymous Martinmas Homily’

1st June: Mark Atherton, ‘Ælfwine and the guild of thegns: another look at the second half of The Battle of Maldon’

15th June: Emily Kesling (Oslo), ‘The Royal Prayerbook and Intellectual Exchange across the Channel in the Eighth Century’

29th June: Niamh Kehoe (UCC), ‘Fool Steam Ahead: the Role of Humour in the Passion of St Eustace’

21st September: Amy Faulkner (UCL), ‘Since berofene: Loss of Life and Treasure in Exodus and Beowulf’

28th September: Kazutomo Karasawa (Rikkyo Univ.), ‘Borders between the Human and the Monster Worlds in Beowulf’

For more medieval matters from Oxford, have a look at the website and the OMS blog