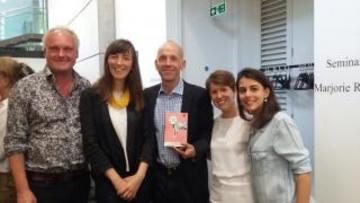 The Oxford-Weidenfeld Prize is for book-length literary translations into English from any living European language. It aims to honour the craft of translation, and to recognise its cultural importance. It is founded by Lord Weidenfeld and funded by New College, The Queen’s College and St Anne’s College, Oxford.

The winner of the 2017 Oxford-Weidenfeld Translation Prize was announced at the prizegiving and dinner at St Anne’s College, Oxford on Saturday 3 June. This was the crowning event of Oxford Translation Day, which boasted a varied programme of talks, workshops and readings.

Frank Perry won the 2017 Prize for his excellent translation of Lina Wolff's Bret Easton Ellis and the Other Dogs (And Other Stories).

“Although Swedish literature in translation tends to be dominated by crime thrillers, Lina Wolff’s debut novel, in Frank Perry’s marvellous translation, is proof that it has a lot more to offer the foreign reader. And yet, that doesn’t mean that there isn’t a riddle or mystery at the heart of this book. The voice of our narrator Araceli Villalobos, a young woman living in a small Spanish town, pulled us in and didn’t let us go.”

Enquiries about the Oxford-Weidenfeld Translation Prize should be directed to the Prize administrator, Dr Eleni Philippou, at Comparative.Criticism@st-annes.ox.ac.uk.