On Tuesday 26th April, Professor Catherine Hall (UCL) delivered a provocative lecture based on her recent research in the history of slave owners in Jamaica: ‘Rethinking Slavery and Freedom; Or, What is a Man?’. This was a joint event hosted by the Gender, Women and Culture Seminar, the Long Nineteenth Century Seminar, and the Modern British History Seminar, and took place at St John’s College.

Following the lecture, Professor Hall held an interactive postgraduate workshop. This involved discussion of a series of pre-circulated papers authored by the students, examining race and gender in a variety of historical perspectives.

Olivia Robinson began the discussion speaking about ayahs and amahs, a group of female nannies who were abandoned in London having arrived with colonial families. Robinson explained how the British infantilised the nannies, despite their provision of essential domestic services.

Rouven Kunstmann then moved the discussion to gendered moralities and women’s columns in 1950s newspapers in Nigeria, explaining how journalistic discourse constructed stereotypes of ‘bad’ and ‘good’ women, stemming from anxiety about prostitution in the colonial state.

Debate about black and white masculinities was then introduced by Mike Joseph, presenting his work on British and French Caribbean involvement in World War 1. Joseph spoke about competing masculinities, provoking questions about the influence of ethnicity, war and racism on manhood.

For several speakers, the workshop presented an opportunity to approach their research from a previously unconsidered gendered angle.

Following the presentations, Professor Hall offered valuable insights on the themes raised and provided specific feedback for the panellists.

Hall urged speakers and participants alike to always engage with gender as a fundamental category of historical analysis, but not to overlook economics and politics in the process, emphasising “there is no personal without the political”.

Over a drinks reception afterwards, all attendees agreed how stimulating and thought-provoking the workshop had been in examining the intersection of race, gender and sexuality, as some of the most pertinent categories influencing the current writing of history. 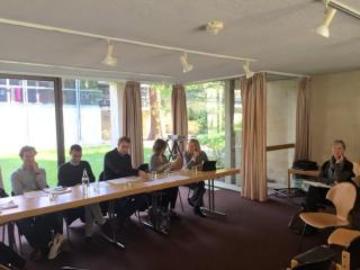