On the 28th of November 2018 was held the first workshop of the Oxford Research Centre in the Humanities questioning 'What is a Decolonial Curriculum?' When hearing this question, I hear other words such as those pronounced in July 2015, by former British Prime minister about people trying to reach the UK. David Cameron referred 'to a swarm of people coming across the Mediterranean, seeking a better life, wanting to come to Britain because Britain has got jobs, it’s got a growing economy, it’s an incredible place to live'. The text I championed for the workshop is an article published in 2017, by the American scholar Yogita Goyal that is entitled: The Logic of Analogy: Slavery and the Contemporary Refugee1. Mentioning these very words of David Cameron, it explores the collective imaginary that they are reflecting.

Goyal starts by referring to the Zong atrocity that occurred in 1781 and was made famous by William Turner by his painting The Slave Ship2. At the time, the captain of a British slave ship chose to throw 133 slaves overboard so that he could claim them as insurance losses. Since Turner, many artists, novelists and scholars, have used the Zong atrocity to emblematise current conceptions of history and racial capitalism. For example, the photographer Aris Messinis, who witnessed drownings in the Mediterranean in 2015 said that the analogy to slave ships sailing the Atlantic 'was exactly right – except that it's not hundred years ago3'. Media coverage repeatedly invoked slavery as a 'grim historical parallel', trying to evoke among spectators the moral outrage associated with Atlantic slavery.

On this, the text of Yogita Goyal falls within a Decolonial Curriculum because she argues that current narratives and images of migration show migrants as the 'living embodiment' of a Western transcended past. The idea impregnated the minds so well, that in 2015, the Word Press photo award was granted to Massimo Sestini, with an aerial photograph of the former Mare Nostrum operations in the Mediterranean (fig. 1). It evokes the 1788 campaign launched by a British abolitionist group which disseminated cutting plans of the Brookes vessel (fig. 2). In 2016, the same award was granted to Sergey Ponomarev with a photograph (fig. 3) that reminds Géricault's masterpiece Le Radeau de la Méduse, whose aim was in particular to denounce persistence of slave practices.

Whereas the spectrum of slavery belongs to an outgrown past, Goyal asks:'What does it mean to view a contemporary […] crisis through the lens of a historical event like slavery?’. On this, she warns about metamorphic motifs bringing the slave narrative, that act as shields hiding the role played by the West in generating these humanitarian circumstances. For example, 70% of arms exports made in the European Union are intended for regions outside the Union, among which Middle East is the first beneficiary.

From there, historical analogies inject a new epistemic momentum in several different ways. In visual fields of knowledge, they interrogate the power of resistive practices of viewing and photographic representations. In the teaching of history, they require us to avoid conflating past and present to make their juxtaposition yield better notion of human rights. In international law, they point to contemporary instances of slavery such as human trafficking and child abduction.

Based on the slave's analogy, media images of the 2015 migrations have enshrined a collective imaginary to the point of being probable factors of the 2016 British referendum's campaign. Goyal’s questioning about the analogy between slavery and the contemporary refugee is thus an indispensable reading grid of today's most topical issues and a labile notion through which building a decolonial curriculum. 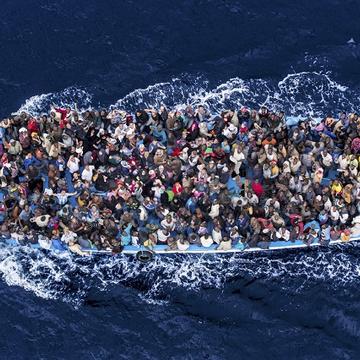