Refugee Heritage: the archaeology of the Calais ‘Jungle’

Refugee Heritage: the archaeology of the Calais ‘Jungle’ | Sarah Mallet

Sarah Mallet has been using archaeological techniques to research a modern refugee camp. In partnership with the Museum of London Archaeology (MOLA), her project researched the visual and material culture of the Calais ‘Jungle’, based on a large number of objects from the temporary refugee camp which were collected by the artist Gideon Mendel. Sarah explains that, ‘by examining the material culture of the camp through the lens of archaeology, our innovative approach accounted for the political, cultural, historical and social trends that led to 10,000 people living in a refugee camp in Northern France between 2015 and 2016.’

The project involved archaeologically recording 2,189 objects using guidelines from MOLA, a charitable company and one of the largest commercial archaeological companies in Britain, with over 40 years of experience working with archaeological finds. This ‘post-excavation’ work with the collected material from the Calais ‘Dzhangal’ or ‘Jungle’, had two central aims: firstly, to contribute to an understanding of the camp, its residents and those connected with it through the study of artefacts collected at the site, and secondly to develop a reflexive approach to current methodologies for dealing with archaeological collections.

The partnership has allowed for an in-depth assessment of how ‘unusual’ archaeological materials can shed light on post-excavation processes, while creating a unique body of material as visual testimony to the lived experience of a European refugee camp.

The original project was completed in September 2019, with an archaeological record created for each object. Since then, the awarding of a HEIF Social Science KE grant has allowed the project to develop a second phase in which, says Sarah, ‘we will select some groups of objects and conduct a post-excavation assessment on them to deepen our understanding of the camp.’

Sarah’s overall aim, she explains, is ‘to present an alternative to the framing of forced migration as a temporary “emergency” and to use both curatorial and archaeological methodologies to give a legacy to the camp, a space which was inherently impermanent, thus creating the time and space for new conversation about the central place of migration in the 21st century.’

Working with MOLA, Sarah adds, ‘has been hugely beneficial; their approaches to recording the materials were key in developing and thinking about the project. It was also important to step out of academia and work with a business, with its different constraints around budget and time.’ 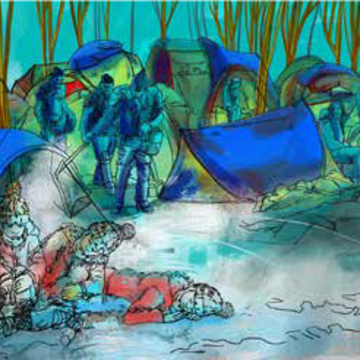